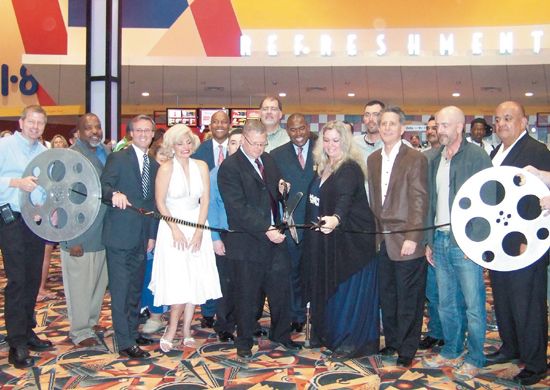 By GILBERT HOFFMAN Northeast News
GREENSPOINT– It was an exciting Grand Opening, almost like Hollywood, as hundreds of invited guest and a few celebrity “look-alikes” gathered to cut the film (ribbon) and cake to officially open the new 20 screen Cinema at Greenspoint Mall.
The event took place last Thursday night, and the theater is now open to the public every day, showing first run movies in their state of the art facility.
The new 20 screen theater complex is the centerpiece of a “renaissance” planned for the mall, which will include new stores, restaurants, and an outdoor plaza and public space.

This work will be conducted by the Greenspoint Redevelopment Authority, which has been planning the project for several years. Financing, leasing and permitting have all held the renaissance back, but it is expected that the cinemas will be the impetus to move the other projects forward.
The new cinema has digital projection, and some movies may be shown in 3-D, according to Premiere Cinema Corporation president Gary Moore, who was present at the opening.
In addition, some participants came dressed as their favorite movie characters, including Marilyn Monroe and Austin Powers.
The theaters also have the latest surround sound technology, and feature a comfortable high-back seat that rocks/reclines and has retractable armrests, headrests, and lumbar support.
IMAX® DEAL SIGNED
Five of the theaters in the complex have been reserved for a new IMAX® theater. Premiere Cinema has inked a deal with the IMAX® Corporation to open 4 new theaters in Texas. The IMAX® screens are 75 feet wide and 60 feet tall.
Moore commented on the economic impact of adding IMAX® to the Greenspoint complex. “IMAX will draw more people into the market from a much wider geographical area, which directly benefits …the local economy.”
Greenspoint Mall is owned by Triyar Cannon Group of Los Angeles. Film producer Bob Yari, president of the company, noted that the cinema opens directly into the mall with a wide hallway into the Macy’s area. He said “The new Premiere Cinema will create a synergy for the mall.”
Also present at the ribbon cutting, Chamber president Reggie Gray and Mall General Manager Ray Bejarano said they welcomed the opening of the theaters and the incentives they offer to other merchants to join in the renaissance of the Greenspoint area.

END_OF_DOCUMENT_TOKEN_TO_BE_REPLACED 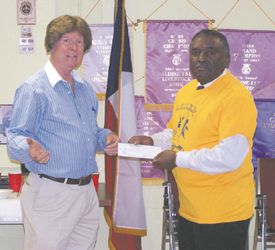 Being called a chicken is something that most elementary students try to avoid, however a group of fourth grade Aldine students are happy to admit they are chicken.
The Aldine Optimist Club, the founder of the Aldine CHICKEN Club, recently showed their support for the anti-drug program in a tangible way- donating $4,000 to the program
Optimist Club President Steve Mead presented the check to Clarence Johnson who coordinates the CHICKEN Club for Aldine ISD, during their May 11 meeting.
This CHICKEN Club stands for- Cool, Honest, Intelligent, Clear-headed, Keen, Energetic and Not interested in drugs.


The anti-drug program is similar to the DARE, (Drug Abuse Resistance Education) program offered to fifth graders.
Recognizing the influence of peer pressure on students to take drugs, the CHICKEN Club uses the same technique in reverse. Through positive peer pressure, students are empowered to “just say no.”
The club was founded by the Optimist Club in Phoenix, Ariz., and tailored for use in Texas districts by the La Marque Independent School District.
The Aldine Optimist Club was instrumental in bringing the program to the schools and has been an active supporter since its inception more than eight years ago.