“The congressional redistricting map unveiled yesterday by Republicans in the state legislature is the clearest example of Republicans’ deliberate attempts to dilute Hispanic and African-American representation in Texas. Despite the fact that Texas’s minority population has grown substantially over the past decade, becoming the state’s majority population, the Republican proposed map suppresses their influence.
“While nearly 90 percent of Texas’s growth over the last decade was due to population growth among Hispanics, African-American, and Asians, state Republicans allocate no additional seats where these Texans have the ability to influence the outcome of an election. These efforts by Republicans are nothing more than a concerted attempt to deny every Texan the power of one person one vote over the next decade. This is retrogression, plain and simple. This deliberate attempt to silence the voices of such a large segment of our population is contrary to our American ideals, and should be resoundingly rejected by all Texans.
“Texas is a richly diverse state, and the new congressional map should reflect the large influence of Texans of Hispanic, African-American, and Asian descent, not weaken their voices. Our state’s gains in congressional seats are the direct result of minority growth, and the new congressional map should reflect this reality.” 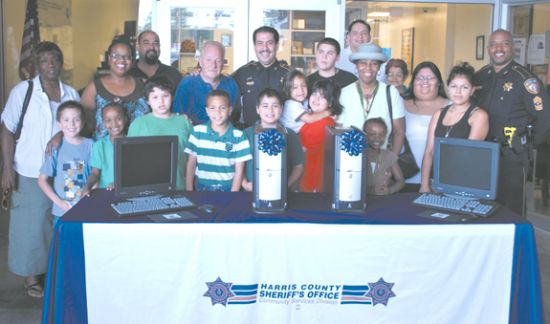 HOUSTON – On May 31, 2011, Sheriff Adrian Garcia and deputies at the Harris County Sheriff’s Office (HCSO) Aldine Storefront distributed computers to 20 deserving families in the Aldine area.
The computers, which would have otherwise been thrown away, were refurbished and donated by DeVry University.
The presentation of the computers was held at the HCSO Aldine Storefront located at 5202 Aldine Mail Route in northeast Harris County.
{{mpore}}
“I hope you use these computers to do your homework and school projects and not for playing video games,” said Sheriff Garcia to the children receiving the computers. He also urged the parents and guardians to keep a close eye on what their kids browse on the internet and who they chat with.
Many of the families are headed by grandparents raising their grandchildren. “These kids know a whole lot more about computers than I ever will,” said one of the recipients. “I am grateful and honored for these computers because I certainly couldn’t afford to buy one,” she added.
A big thank you to DeVry for the donation, to Sgt. Dean Earl for finding the deserving families to share these gifts with, and to the HCSO’s Aldine Storefront deputies for organizing today’s event.