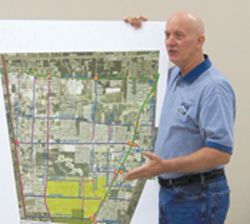 EAST ALDINE– The quarterly report of the East Aldine Economic Development committee, presented at last Thursday’s District luncheon, included stunning news on the rapid changes and improvements that are happening in the District and around the area.
Reports were heard from EAMD Executive Director David Hawes, staff members Ray Lawrence, Scott Bean and Gretchen Larson, State Representative Armando Walle, and HICC Chamber president Reggie Gray.
Hawes reported that the legislature had approved the expansion of the district north and west, and a sales tax election in an existing area east of US59. Governor Perry has signed the bill. This will provide an additional 1 cent sales tax to be collected in that area, similar to sales tax now collected in most of the District. The overall rate will remain 8.25 percent, even after approval. The additional revenue will be used for water and sewer projects in the affected area, Hawes said.

Scott Bean reported that progress has been made on water and sewer in the Zone 11 area north of Little York. The project totals $7 million and ground will be broken July 17. A 12” water line will be laid on the east side of US59, and a 21” sewer trunk line in the middle of the area. Individual taps will be negotiated later. Water and sewer for Sherwood Place have been designed, and should start next year. However, the district and county are waiting for a construction grant of over $3.5 million in the EDAP program, which has not yet been authorized.
Both Hawes and Walle said that the legislature has redrawn Precinct boundaries, and Pct. 1 and Pct. 2 will have new dividing lines in the near future.
The District is working with an attorney, Jim Boyle, who was present at the meeting, to fight rate increases from the new water company in the area, Aqua Texas, which has bought American water. Some customers have reported increases in their bills of as much as 3 times.
Ray Lawrence reported on new businesses and jobs that have located within the district, or nearby. These include Cummins Engine, Woodgrain Millwork, Alliance Supply management, Precision Drilling, and InterFlow. These are expected to bring in about 1000 new jobs. Many of these are located on JFK Boulevard, in the Kennedy Greens Business Park, which is a very successful 186 acre project of Clay Development. Also on JFK, Noble Drilling has built a new 54,000 sq. ft. building, and Burcher Welding has expanded on US59, Lawrence said.
Other projects that are coming next year include a 100 acre development on JFK between Lauder and Greens Bayou, for light manufacturing, and development along the east side of US59. Lawrence said there are at least 17 properties in that area, ranging in size from .4 acre to 15 acres, that are available for commercial development when utilities are available, in the near future.
Lawrence also noted that even at a time when the general economy is slow, the Aldine area with the airport nearby can count on growth of 2 to 3 percent in freight loadings at the airport, which affects the immediate area. Also forecast is an expansion of activity at the Bayport Terminal when the Panama Canal work is completed in 2014.
What all of this means to East Aldine, Lawrence said, is better home values and increased retail sales in the very close future. 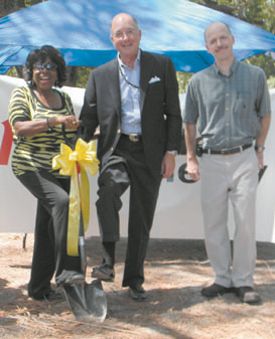 Aldine Y.O.U.T.H. Community Center, who recently celebrated their 21 anniversary, is now celebrating the opening of the new Aldine Y.O.U.T.H. Community Park. The park will be built at the rear of the property now used by Y.O.U.T.H. There is an extensive growth of trees, some small streams, and a protected rural type setting to be developed with campsites, benches, and a pavilion.
Last thursday, June 30, Sylvia Bolling, Executive Director of the center, staff, members and volunteers as well as the youth organized a groundbreaking ceremony.
The opening of the new park is the effort and work of many people, and funded by a generous donation from Ken Fisher, CFO of Noble Energy.
Noble Energy, a company on Beltway 8 and North Freeway has been one of the major leaders in this project. “We are here today to thank God for very special people (Noble Energy staff) He sent us,” said Bolling.
“We have a team in beautification service and projects, and we identified Sylvia and Aldine Y.O.U.T.H. as an unique and special organization,” said Ken Fisher, CFO at Noble Energy. “We came and visited her in January and she painted a picture of the park, we have been working hard to make this happen.”

At the park “we’ll watch movies in one of those big TV screens and you can bring your own lawn chair, we’re going to have concerts and do praying,” Bolling said.
The camp will also have a space for camping which can be used for boy scouts and girl scouts camping activities.
Ms. Bolling said she saw the need for kids to have a place to play. “We have 5 appartment complexes close by and kids living there just have a small piece of grass to play on,” Bolling said. “It’s not the same to play in the concrete.”
Ken Fisher said they are happy to be involved and hope the park provides many years of enjoyment to everybody.