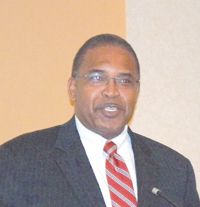 By GILBERT HOFFMAN North Forest News
NORTH FOREST– The North Forest ISD Board of Trustees last Thursday evening voted to end the services of Superintendent Adrain Johnson. This was accomplished by accepting Johnson’s resignation as of July 31, which no doubt had been requested. Then the board moved to keep Johnson on leave until that date, and denying him back pay since his suspension in April. The vote came after an hour of discussion in a closed meeting of the board. The vote was unanimous, six Yes and no No votes. Board member Horace Williams, Jr. was not present or voting.
In the official action, the board agenda stated that the reason for dismissal was “for good cause” but no further information was available. The board had held three called meetings with this business on the agenda, but delayed the final vote as negotiations with Johnson and his attorney continued.
Johnson had been the superintendent of the District since his appointment in October 2008, when the State of Texas Education Commission took control of the troubled district, and replaced the Board of Trustees with a new Board of Managers. However, the new law under which this action was taken, only allowed the state two years to manage the district. In November 2010 the old Board of Trustees was reseated and regained control of the district.
The state assumed control of the district in 2008 due to its weak financial condition, irregularities in student attendance reporting and financial accounting, and poor standing academically on most of its campuses.
Johnson, who was an associate administrator at TEA at the time, and previously a superintendent at LaMarque ISD, had worked to improve these conditions. The district is now on better financial footing, and seven of the eight campuses are rated “acceptable” or better now by the state. However, the drop-out and graduation rate at the high school has not improved, and in fact has caused the district to receive an “unacceptable” rating and the probation rating on its accreditation. Johnson has made a number of changes at the high school, and says that more time is required to realize the results of these. North Forest is the recipient of a federal/state grant of $5.26 million, over 3 years, to make these changes at the high school, including a new principal, new staff, and better procedural methods. Johnson and Edna Forté worked together on this Title I improvement grant.
In addition to raising the ratings of most of the campuses, Johnson has instituted many other innovative changes in the district, including bringing a YES Prep charter school into one of the unused buildings, giving serious academic students another choice and theoretically attracting out-of-district students. He has also been instrumental in setting up an Education Foundation, independent of the School District, that would raise funds for student, teacher, staff, and campus enhancements that would otherwise not be available. The Education Foundation was set to start a major fund drive in April, but now has been put “on halt” according to officials.
When the Board put Johnson on leave on March 28, the board said to the Northeast News, “In light of ongoing fiscal deficiencies, graduation rate concerns at North Forest High School, accreditation issues, and time sensitive staff reduction priorities, in the best interest of the district, the Board of Trustees felt it necessary to move in a different direction by placing the Superintendent on paid administrative leave.
“Educating the students of NFISD continues to be the number one priority of the district. The Board is confident that the district has capable and competent individuals who can continue day-to-day operations. Effective immediately, Edna Forté, Executive Director of Federal and State Programs, will serve as Acting Superintendent.”
The NFISD board, with different members, has a history of firing superintendents, and in at least one case rehiring him. And now five of the last six superintendents have left due to firing or pressure from the board.
At present, Forté continues as Acting Superintendent, and the Board has asked TEA and SBEC for an “Emergency Certificate” for her, so that some time in the future they may appoint her as Superintendent, even though she has not completed all requirements for the position.

NORTHEAST – The Houston Community College Board of Trustees recently approved a proposal that will allow the expansion of services to the North Forest community in fall 2011. Temporarily located at the Forest Brook Middle School at 7525 Tidwell Road, 77016, the HCC North Forest Vocational Technical Campus began serving the community with academic and workforce training in spring 2010 with evening and weekend classes.
With the expansion, HCC North Forest will now utilize 39,000 sq. ft. of space on the school’s 3rd floor that will allow for services to include full-day hours of operation for students interested in taking both day and evening classes. The expanded hours of operation will provide students with an opportunity to enroll in classes Monday through Friday from 8 a.m. to 10 p.m. and on Saturdays from 9 a.m. to 1 p.m.
Completely separated from the middle school students who will remain on the first and second floors of the facility and isolated from the college students, the third floor expansion will allow for more classrooms, offices, and student services. In the fall, a Small Business Incubator will also be added to the expanded space. Developed largely based on integral input from North Forest community leaders that serve on the HCC North Forest Blue Ribbon Advisory Committee, the Small Business Incubator will comprehensively serve as a resource center for the community and business leaders desiring to increase economic growth in the community.
Additional amenities and services will include an open computer lab; a student lounge; an expanded library; job placement services; additional parking spaces; specialized certificates; continuing education classes; and more core classes for university transfer, AA and AAS degrees. High school juniors and seniors who are currently enrolled or looking to enroll in dual credit courses will also be able to take advantage of the additional operation hours and course offerings. Students who take advantage of this benefit to the North Forest community will experience smaller class sizes with more one-on-one instruction and new training programs in high-tech and in-demand career fields like Wind & Solar Energy Technology training, Nursing, and Business.
To learn more about HCC North Forest’s new expansion of services to the community and to register for classes, join us at the HCC North Forest “Each One, Bring One” Registration Fest on Saturday, August 20, 2011 from 9 a.m. to 1 p.m. at the HCC North Forest Vocational/Technical Campus. Students who enroll and encourage others to enroll at the North Forest Campus must show proof of both enrollments in order to enter a drawing for a chance to win an iPad 2 at the registration fest. For more information, call 713.635.0427 or visit northeast.hccs.edu. 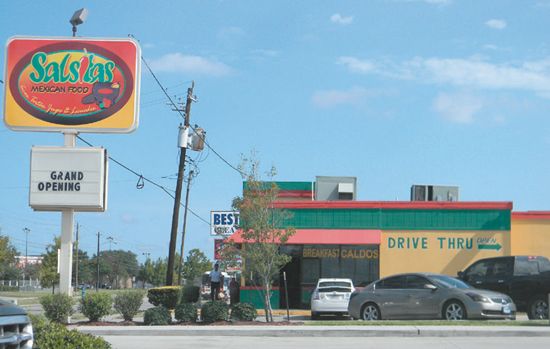 NORTHEAST– The Salistas Mexican Restaurant at 11106 Airline Drive near West Road was heavily damaged by a fire Thursday morning, around 12 am, according to Houston fire officials.
The fire, in an old KFC restaurant converted recently to a Mexican theme, apparently started in a storage area at the rear, and spread to the kitchen before being quelled by firefighters.
The cause of the fire is under investigation at this time, but fire officials said they think electrical problems may be at fault. 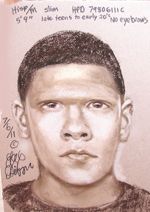 Crime Stoppers and Investigators with the Houston Police Department are seeking the public’s assistance in identifying a male suspect wanted for Aggravated Assault with a Deadly Weapon.
On Sunday, June 19, 2011, at approximately 9:00 pm, the victim, a Park Ranger was completing his duties of securing the park by closing and locking the gates located at 12000 Aldine Westfield. A Hispanic male approached the Park Ranger and demanded that he turn his headlights off. The Park Ranger advised the suspect that they were on to notify anyone in the park that the park was now closing.
The male suspect began yelling and cursing at the Park Ranger to turn off his headlights.

When the Park Ranger did not comply with the suspects’ request, the suspect turned and walked to a gold color Camry where he got a gun and started shooting at the Park Ranger’s vehicle. The Park Ranger was struck by a possible bullet fragment causing injury to his right leg. The victim was treated for his injuries at a nearby location and released.
The suspect is described as a Hispanic male, 18-25 years of age, 5’09”, and weighing160 lbs. The suspect had a crew cut hair cut and was wearing black shorts with a black shirt.
The suspect vehicle is described as a 1997-1999 gold colored Toyota Camry
Attached is a sketch drawing of the suspect.
Crime Stoppers will pay up to $5,000 for any information called in to the 713-222-8477 tips hotline or submitted online at www.crime-stoppers.org that leads to the identification, charging or arrest of the suspect in this case. Tips can also be sent by text message – Text TIP610 plus your tip to CRIMES (274637). All tipsters remain anonymous.