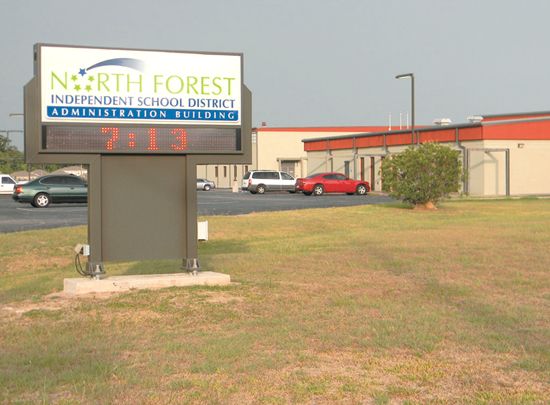 By GILBERT HOFFMAN Northeast News
NORTH FOREST– In a letter dated July 8, 2011 the Education Commissioner for the state of Texas, Robert Scott, informed the school board’s president, Albert Coleman, and the Acting Superintendent, Edna Forté, that he was ordering the district to be closed as of July 1, 2012.
Scott said that he was forced to this action because he had determined, that after ratings are issued August 1, the district will be rated Academically Unacceptable for the third straight year, and the North Forest High School Academically Unacceptable for the sixth straight year. In addition, the financial accountability rating for the district will be substandard for the fourth consecutive year.
For these reasons, Scott said the district would be annexed to Houston ISD effective July 1, 2012. However, Scott said the district could appeal its ratings and the order of annexation.

Scott put the current TEA Conservator, Ms. Kay Karr, in charge of the transition to HISD. He said that it would be her role to facilitate the annexation process in conjunction with the Houston ISD to ensure a smooth transition and transfer for the district and its students. Karr would report to both NF ISD, and Houston ISD, he said, and have the authority to direct, approve and disapprove actions as she deems necessary to promote the transition.
Scott also said that his action would require preclearance under the National Voting Rights Act of 1965, from the U.S. Department of Justice.
Scott concluded his letter to North Forest by saying “While it saddens me to take this action, given the expectations of state law and my concern for the long-term education of the students served by North Forest ISD, I am compelled to move forward with this process.” He continued, “It is my sincere desire that the agency, the district, and the community work together in a cooperative and productive manner to address the needs of the district’s students.”
District issues response
After a board meeting on July 11th to discuss the TEA action, the acting superintendent issued a “Public Statement” regarding the situation.
Ms. Forté said that the District was appealing the 2011-2012 accreditation status (that will be issued on August 1). She indicated that the strategic plan was taking the district in the right direction, financially and academically.
The statement indicated NFISD would work with TEA to achieve a different result, with the North Forest District “intact and able to provide the quality education our students deserve.”
Public Meeting called to Save the District
Under the leadership of Congresswoman Sheila Jackson Lee, a public meeting has been called for Saturday, July 16 at 3 pm at the Forest Brook Middle School. Participating in this meeting will be Congresswoman Lee, the NF ISD Board of Trustees, Elected Officials, Ministerial Alliance members, and community leaders, according to a flyer from Lee’s office.
This leaflet states “Sometimes we have to Just Stand,” and that the meeting is an “Opportunity to be heard on behalf of our Children.”
In addition, Congresswoman Lee issued a statement strongly questioning the ruling for closure, suggesting that hypocrisy and racism were evident in the decision. She asked what difference more funding might have made to the quality of education, and noted that Governor Perry had taken federal education funds and used them for other purposes.
District has a history of problems
North Forest has seen six superintendents in the last few years, and dismissed each for cause. This instability is one of the issues that prompted the TEA action. Other issues included mismanagement of finances, continuing low academic performance by students, a low completion or graduation rate, and incorrect reporting of attendance to the state.
School population has declined over the last 10 years, with only 7,500 students now, instead of the 12,500 a decade ago. The district has closed at least two schools and delayed construction in an effort to adjust to the needs.
Adjoining districts include Sheldon, Galena Park, Houston, Aldine, and Humble, but none of these has been eager to absorb the North Forest district in the past, with its problems.
TEA installed a Conservator in 2007 in an effort to help and monitor the district, increasing this to two Conservators in 2008. In October 2008 they installed a Board of Managers to replace the Board of Trustees, and a new Superintendent, Adrain Johnson. As allowed by state law, the Managers governed for two years and then control was returned to the Trustees. Superintendent Johnson continued until April of 2011, when he was placed on leave by the Trustees, who appointed an acting superintendent, Edna Forté. It is this management team that is dealing with the current situation.

END_OF_DOCUMENT_TOKEN_TO_BE_REPLACED

Redistricting shifts much of Aldine into Precinct Two 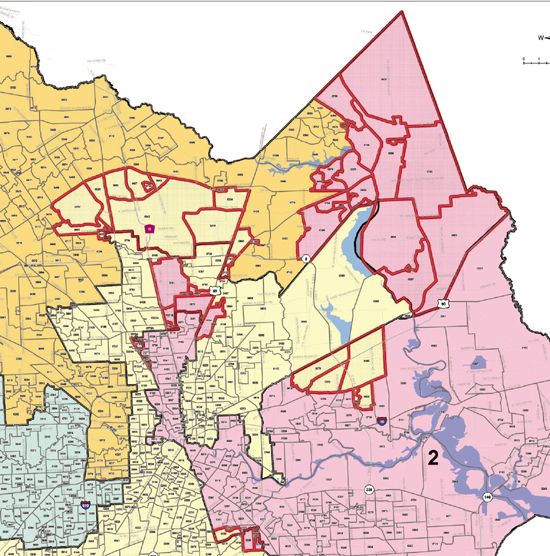 By LUKE HALES Northeast News
The Harris County Commissioner’s Court has made some significant changes to the district map – and that means many area residents will soon have a new commissioner.
The redistricting motion, meant to equalize the populations in each commissioner’s district according to the 2010 Census, would shift approximately 100,000 citizens currently represented by Commissioners Steve Radack and Jerry Eversole in Precincts 3 and 4 to El Franco Lee’s Precinct 1 and Jack Morman’s Precinct 2.
According to the newly proposed map, Precinct 3 would remain the largest with 1.04 million residents, though slightly smaller than the 1.15 million from before. Precinct 1 would contain 1.04 million residents, a step up from 940,000.

Precinct 4 would lose a good number of constituents, dropping from 1.12 million to 1.02 million. Precinct 2 would stay the smallest, with only 991, 395 residents.
The biggest chunk of shifted territory would be seen in the county’s northeast, as Commissioner Morman – who ousted longtime position-holder Sylvia Garcia in Precinct 2 – would gain the Atascocita area and land around Lake Houston, both previously represented by Jerry Eversole. This move could benefit Morman, as the voters in his newly gained ground are traditionally more conservative and may potentially help Morman, a Republican, at the polls.
Also notable is the sizable change around Bush Intercontinental Airport. Commissioner Lee would have more roadways outside the city of Houston, which in turn would entitle his constituency to more infrastructure funding.
Hearings on the new redistricting map will be held at 6: 30 p.m. Monday, July 25 at the East Harris County Activity Center, 7340 Spencer Highway in Pasadena; at 7 p.m. on Thursday, July 28 at the Harris County Cavalcade Office, located at 3815 Cavalcade Street in Houston; at 6 p.m. on Friday, July 29, at the Mangum-Howell Center, located at 2500 Frick Road in Houston; and at 4:30 p.m. on Monday, Aug. 1 at the Trini Mendenhall Sosa Community Center, located at 1414 Wirt Road in Houston.