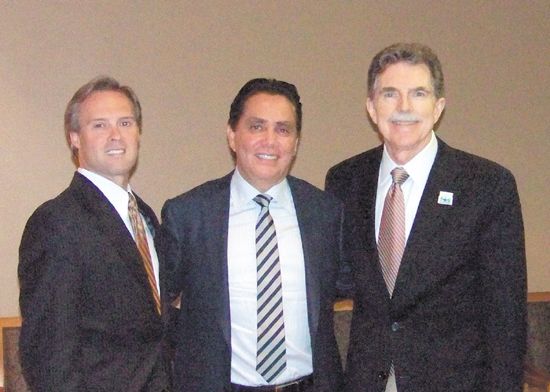 NORTHEAST– The Houston Intercontinental Chamber of Commerce announced the July 19th opening of a new satellite office in north Houston dedicated to international business and chamber members.
The new office was created in a partnership with the Hispanic Business Center (HBC) and will be in the HBC building, located at 12700 Northborough near 1-45 and Beltway 8, a few miles from Bush Intercontinental Airport and just minutes from downtown.
HBC, owned by Aiejandro Del Valle and opened in February 2011, was created to provide business opportunities for Mexican and international businesses wishing to do business in or expand to Houston and US markets. It is expected that the HBC will bring businesses and jobs to the area.
“This is one of the most significant events in the Chamber’s 25-year history,” commented Reggie Gray, President of HICC. “This new partnership will allow the Chamber to focus on our growing international membership and especially on our growing Latin American markets.” “We consider it an honor to be chosen by Mr. Del Valle and several leaders of Mexico for this partnership.”
The Chamber will open the offices on July 19th, and held a membership mixer on Thursday, July 21, at the Greenspoint Club to celebrate the new partnership. The formal ribbon cutting will be in August at the HBC building.
Del Valle and Gray recently travelled to Guadalajara, Mexico for meetings with several company owners, entrepreneurs, and public officials to announce the partnership.

END_OF_DOCUMENT_TOKEN_TO_BE_REPLACED 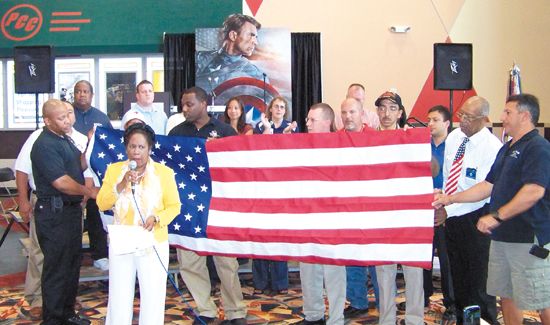 NORTHEAST HOUSTON– Veterans were honored at a special program that was held last Saturday inside the spacious lobby of the Premiere Cinema at Greenspoint Mall.
The program was entitled “Operation Welcome Home” and featured exhibits, information booths and tables, speakers, and entertainment to honor returning military personnel, many of whom were on hand. The program was put together by Premiere Cinema Associate Director John Edwards, who is himself a veteran of the U.S. Army Medic corps. It coincided with the opening of the patriotic film “Captain America.”

Featured speakers included Congresswoman Sheila Jackson Lee, and Sgt. John Boerstler, of the Wounded Warrior Project. He told the story of fighting in Iraq, and suffering a debilitating injury to his eye. Yet in the spirit of the Marine Corps, he discharged himself from a military hospital and returned to fight with his unit in western Iraq. A silent auction was conducted to benefit WWP.
The program included several outstanding musical performances, by the Statesmen Chorus from Conroe, a 16 man (and one woman conductor) barbershop quartet, and the National Anthem, performed brilliantly by Ms. Keely Prendergast.
Information speakers were from the VA, Harris County, and various Veterans organizations such as the VFW that offer help to returning military.

END_OF_DOCUMENT_TOKEN_TO_BE_REPLACED

Supporters organize to save North Forest from closure 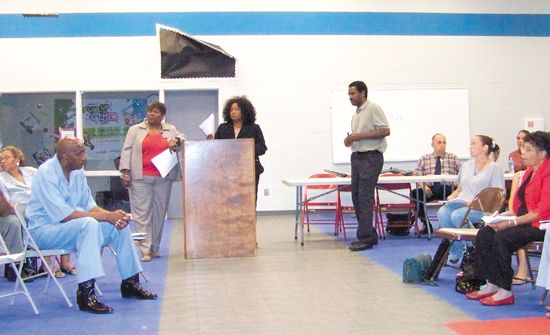 By GILBERT HOFFMAN
Northeast News
The North Forest community continues to respond to last week’s surprise announcement from the Texas Education Agency, ordering the closing of the district after the 2011-2012 school year.
Several meetings have been held to organize a petition drive, and a letter to Governor Perry seeking a reversal of the ruling from TEA Commissioner Robert Scott. Meetings on the subject include the Public Community Meeting on Saturday, July 16th called by Congresswoman Sheila Jackson Lee; the NF ISD Board Meeting the following Monday night, July 18th; and a NEEF meeting on Thursday night, July 21st. Other meetings are scheduled for July 25 at the Community Center, and Aug. 4th for the next NEEF meeting at Shadydale.
In a well attended meeting last Saturday, July 16th, Congresswoman Sheila Jackson Lee suggested that the district and its majority African-Americans were being treated with discrimination, not like white majority districts with similar problems. She urged the public to decide whether they wanted to save the district and the community’s separate identity, and suggested they conside filing a civil rights lawsuit with the federal authorities if necessary. She also promised to help with federal agencies that may have jurisdiction, such as the U.S. Attorney’s office, and the U.S. Department of Education. Other state legislators and local officials spoke in support of the district.

In a meeting held last Thursday night, the superneighborhoods that are involved with NEEF- Northeast Education First, held a rally and organizational meeting at Shadydale Elementary School, where about 100 persons from the community attended. They listened to a presentation by Edna Forté, acting superintendent of the district, and statements of support from some NFISD Trustees.
Forté made a strong presentation, reviewing improvements in the management and educational achievements of the district. Forté said that the district was now solvent, with budget cuts of $4.6 million in the teaching staff, another $700,000 in additional staff cuts, that would result in a fund balance in 2012-2013 of $2.7 million.
She reminded the group that the high school was the recipient of a $5 million federal grant to make changes and improvements, which are underway. Also, with the YES Charter school existing as part of the District, the results can be used to average an improved accountability rating in the future.
She also revealed that several nationally renowned educators, specialists in reforming problem school districts, had agreed to come to North Forest in the next school year to help. These included Pedro Noguera and Ervin Knezek, and perhaps several others.
She introduced the new interim principal for North Forest High School, James Troutman. He spoke briefly, describing how he is already holding teacher training every week, improving the physical condition of the school, including cleaning, and conducting a search for new highly qualified teachers fully certified in science and math.
Forté said that she has contacted TEA asking for a meeting to discuss the letter and her plans for improvements. She said that to date, she has received NO response. However, on August 1 school ratings become official, and she thinks she will get a response after that date.
Board member Lois Edwards and Thadeus Seals also addressed the audience, with specific criticisms of the TEA and their board of managers and their superintendent. She said that in the two plus years that they controlled the district, the high school had no improvements and no new programs. Seals spoke about the history of students that had attended school at North Forest over the years, and the success that many of them have had in their careers and lives, due to their education at North Forest. His message was that there was no reason why the District could not continue to educate the children in a satisfactory way.
Edwards also said that spending by the superintendent and the managers during their two year tenure was excessive, and the budget was not brought under control until Forté was appointed.
The NEEF group took a vote to see if the audience wanted to support efforts to keep the district open, and the vote was 48 in favor, and 0 against.
The group is organizing a petition drive, to get 7500 to 15,000 signatures to send along with a letter to Governor Perry, requesting a reversal of TEA’s closure decision, and allowing the District to remain open.
Robin German Curtis, chair of NEEF, spoke about the urgency of acting to save the district. She pointed out that school will start on August 22, and that parents must soon make the decision where to send their children this year. Ivory Mayhorn said “WE are North Forest. It is up to us to voice a new attitude.”