Representative Armando Walle with special invitations to other local representatives and community leaders invites the community to Town hall meetings on Thursday, August 18, 2011 from 6:00 p.m. – 8:00 p.m. at Ethel R. Coop Elementary School Cafeteria, 10130 Aldine-Westfield and Friday, August 19, 2011 from 6:00 p.m. – 8:00 p.m. at Mac Arthur Senior High School Cafeteria, 4400 Aldine Mail Rt.
These town hall meetings present an opportunity for Representative Walle to provide constituents with a legislative update, answer questions and hear community concerns.
Rep. Armando Walle is serving his second term in the Texas House of Representatives and serves on the House Committee on Insurance and the House Committee on Homeland Security and Public Safety. He represents House District 140, which includes northern portions of unincorporated Harris County and the City of Houston.

END_OF_DOCUMENT_TOKEN_TO_BE_REPLACED

NORTHEAST HOUSTON– The East Aldine District’s board voted at their last meeting to call a special election on Nov. 8th, asking voters in a small area east of US59 to adopt an additional 1¢ sales tax that has not been levied in the area previously. This area had been paying a 7.25% sales tax, while the rest of the District and the city pay 8.25%. If adopted, the extra one cent income will be used to pay for water, sewer and other public improvements as called for in the District’s Service Plan.
A special election will be required by law, and Nov. 8th would be the election day if approved by the board at their next meeting in August, and also if approved by the US Department of Justice, Civil Rights Division. A two week early voting period would precede the day of the voting. The polling location would be the District offices, 5333 Aldine Mail Route, according to the board’s attorney, Tim Austin.

Because sales taxes are paid by store customers more often than area residents, this tax would have little effect on actual area homeowners, who would actually benefit since the money is scheduled to be spent on area improvements including water and sewer in the designated area.
In other District business, the board is preparing to interview possible candidates for open board positions, since there are several openings due to resignations and job changes. Anyone who is interested in serving on the board, and meets the requiremets of the bylaws, is urged to contact Richard Cantu at the District office, 713-595-1220.
The board also heard a report that there will be a mural project to decorate columns and discourage graffiti in Keith-Wiess park. Also, a dog sweep is planned in the near future to deal with the problem of stray and unlicensed dogs. A CERT class is planned in September or October, and a 10th Anniversary observance is also planned for the whole month of October.

END_OF_DOCUMENT_TOKEN_TO_BE_REPLACED 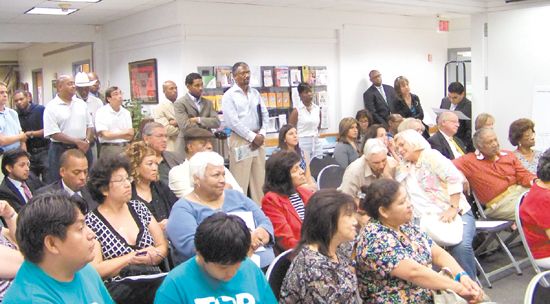 By GILBERT HOFFMAN
HARRIS COUNTY– As part of the redistricting process, Harris County Commissioners hosted four public hearings in their districts, to get public comment on the proposed new boundary map, labeled A-1. New boundaries were required because the 2010 census showed a population gain in Harris County of over 20 percent, but mainly in two precincts, Pct. 3 and Pct. 4 on the west and north sides.
The new map shows major expansion of Precinct 2 into areas such as Aldine, Atascocita and Huffman that are presently in Pct. 4, and also expansion of Precinct 1 into the area around Intercontinental airport. Concurrently, areas of Precincts 3 and 4, where population has grown the most in the last ten years, have been reduced. All of this is required by federal law, that says precincts must be close to equal in population. As explained by Gene Locke of the law firm of Andrews Kurth and U.H. Professor Richard Murray, that helped redraw the boundaries, there were actually eight governing principles that guided the decisions behind the new boundaries.
However, the public meetings on Monday July 25th in Precinct 2 and Wednesday July 27th in Precinct 1 have indicated that many people are not happy with this realignment, for a variety of reasons.

State Senator Mario Gallegos spoke at both of the meetings, and essentially said that the Hispanic opportunity district, historically Precinct 2, had been diluted. Even though the population numbers showed a Hispanic plurality, nevertheless the voting age percentage has been reduced from the 2000 count. Gallegos said this would effectively eliminate the Hispanic Opportunity district in Pct. 2. In his own colorful language, he said “This map is full of the Christmas Turkey.” He called on Commissioner Lee, who heads a black plurality district, to help redraw the lines to more effectively represent ethnicity in both precincts.
State Representative Armando Walle spoke about the harm that the new lines would do to his home district of Aldine. He mentioned that it would split the district in half, with two commissioners needing to provide services. Effective relationships that now exist with Pct. 1 staff would be disrupted, and quality of life programs now being initiated by the East Aldine Management District would be more difficult dealing with two Precincts and new players. He noted that Precinct 2 as redrawn would not actually be an Hispanic Opportunity District. In addition, basic services would be harder for his area to get, because of the dilution of resources required when northeast communities such as Atascocita, Huffman and Kingwood are included.
Indeed, many speakers questioned the commonality of communnities in the north, such as Kingwood, with areas in the south around the ship channel. They also questioned whether the “compact” requirement of redistricting had been met. Many, including Gallegos, thought the map showed obvious “gerrymandering.”
Other speakers against the map included Rey Guerrera, who decried the “elimination of the only Hispanic District we had,” and Lucy Moreno who wanted a Senior Citizens center and now saw this opportunity taken away by the expansion of the districts away from the Cavalcade area.
However, not all speakers were against the map. Al Callaway said he saw an opportunity for Hispanics and Blacks to work together in Precincts 3 and 4 to accomplish more minority goals. State Senator Rodney Ellis said he favored the map too, because it kept the black community together and allowed Commissioner Lee to continue his service to their needs.
Although speaker Fernando Cisneros said he supported the A-1 plan, he noted that Pct. 2 has not actually been an Hispanic Opportunity District, because many Hispanics do not vote. The previous commissioner lost, he said, because she “did not take care of the Hispanic community.”
After the final two hearings, the Commissioners are expected to reconsider the map in August, and finalize the plan. It was indicated that this A-1 map is preliminary, and even after adoption would have to be reviewed by the federal Department of Justice to comply with the Voting Rights Act of 1965.

END_OF_DOCUMENT_TOKEN_TO_BE_REPLACED 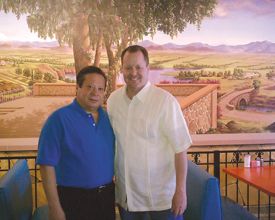 Dr. Craig Mullenix will unveil his first novel, “Standing Ground,” during his book signing Aug. 12 at Rosita’s authentic Mexican restaurant owned by Mr. and Mrs. Manuel Corral who for over three decades have owned and managed one of the best Mexican Restaurants in Houston. Their Fajitas are my favorite and are to die for and their Godorniz En Salsa Chipotle (Quail topped in chipotle sauce and served with refried beans, rice and guacamole) is out of this world.
Author Mullenix like Manuel is a family man with a lovely wife and two sweet children. Writer Craig Mullenix grew up and went to school in this Hispanic community and his knowledge of the neighborhood and his knack for telling a story combine to create an interesting, exciting, and fast moving
novel that displays an intricate understanding of the Hispanic people, their culture, their customs, and their struggle to survive in the United States.

The reader will quickly pick up that Craig Mullenix has a special place in his heart for the Hispanic people and the challenges they face. When you read Mullenix’s “Standing Ground” you are not going to want to put it down until you have read the whole book. It is that gripping with many plot twists and unforeseen consequences for teenagers who act impetuously.
Manuel and Alice Corral have worked long, hard hours together over the past three decades having established their restaurant in 1983. They offer delicious food in the best genuine Mexican restaurant in the area. The excellent service reflects the warm and friendly atmosphere of Rosita’s restaurant. Great food and great service, no wonder Rosita’s is the best authentic Mexican food in the local region. They have extended and enlarged their restaurant as their business has grown over the years. Having raised four lovely daughters in the area and always willing to find time to help the needy and local schools Mr. and Mrs. Corral are examples of the American dream come true.
Rosita’s is the perfect place to kick off Craig Mullennix’s first novel, “Standing Ground” which is going to be a successful series similar to the nationally famous Bluford series.
One and all are invited to Rosita’s restaurant located at 11100 Bentley, Houston, Texas on Friday August 12, 2011 for Craig Mullenix’s book signing of “Standing Ground” from 4 p.m. until 6 p.m. Hope to see you there.