Superintendents report to HICC Chamber on State of their Districts 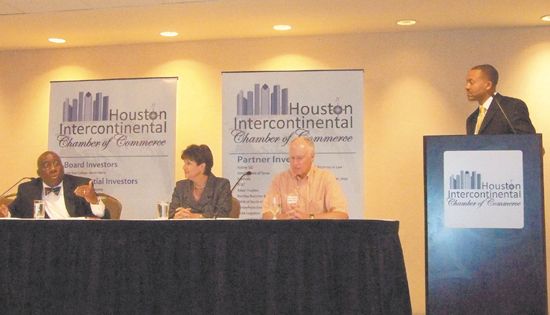 By GILBERT HOFFMAN Northeast News
NORTHEAST– The superintendents of three of the school districts in North Houston made presentations to the Houston Intercontinental Chamber at their luncheon last Thursday, August 4th. The subject was the “State of the District” for each.
Moderating the panel was Lone Star College’s Dr. Larry Rideaux, and participating in the panel were Klein’s Dr. Jim Cain, Aldine’s Dr. Wanda Bamberg, and Spring’s Dr. Ralph Draper. North Forest’s Edna Forté was also scheduled, but was unable to attend.
Chamber members heard similar reports from all three superintendents. Basically, the districts will continue to provide quality education and innovative programs, and have managed to reduce their budgets to match the cuts that came in the recent session of the Texas Legislature.
Cain said this was the good news, and decried the fact that the media often preferred to present the negative side of the story more prominently.
He said that this was the 3rd year in a row that Klein ISD was a “Recognized” district, indicating a measurement of educational success. In the often mentioned TAKS scores, 14 out of 25 of his group had increases in their scores. Klein will be 46,000 students in the coming school year, with most of this growth in the northern area.

Bamberg said that Aldine saw their job as “educating citizenry” and thought they were accomplishing this well on their 74 campuses, with 63,000 students for the coming school year. She said that the district was preparing for the new STARR tests to replace the TAKS tests. These will reportedly be much more rigorous.
In regard to budgets, she indicated state fund cuts could have been worse, and that Aldine has made adjustments to continue a quality education and most but not all of the special programs, such as magnets. This has been accomplished with no layoffs of staff, she said.
Aldine will open a new high school in 2012, but does not plan any additional construction for the near future due to the economy.
Draper said Spring ISD will open a new campus, with the area’s first “Green” school. It will have a Discovery based curriculum. He indicated that Spring is adjusting to changes in Education, as we become more of a global society. Also, he noted that there are new ways to learn, with emphasis on electronic “gadgets”. He also praised his teachers, who have already returned to work in many cases, he said, even though their pay has not started. He recommended that Chamber members read a book on the state of education, “Catching Up or Leading the Way” which expounds on the idea that the US is more advanced in education than most of the countries of the world. He noted for proof, that 75% of the world’s patents are in the US.
Draper also said that tomorrow’s education must have a balanced “portfolio” approach, with many choices, that include Academics, Athletics, and the Arts. The goal would be to allow the development, growth, and expression of themselves by tomorrow’s students.
Chamber members presented questions from the floor, to make the luncheon more interactive.
Sally Bradford of the Greenspoint Redevelopment Authority asked about the status of Arts Programs in the Districts, expressing some concern that state budget cuts might be felt most in this area. Superintendent Bamberg said that in Aldine, Fine Arts programs had not been cut, but that 5 of 22 magnet programs had been. Dr. Draper said that there were no cuts in classes in Spring, but some staff in the arts had been cut. Dr. Cain said there were no cuts in Fine Arts in Klein.
Jack Drake of the Greenspoint District asked where the leadership in Education was coming from in Texas. Cited by the superintendents were leadership conferences, TASB and TASA agencies, and Region IV workshops.
Dr. Bamberg, who has been named the Superintendent of the Year in Region IV, stated that the public must help make Education a Priority in the Texas Legislature.

END_OF_DOCUMENT_TOKEN_TO_BE_REPLACED

Health Expo & Back to School event held at Greenspoint Mall 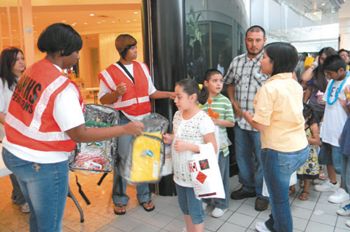 NORTHEAST– Return to school is almost here and various organizations held Back to School events and a Health Expo at Greenspoint Mall on Saturday July 30.
Included in the day’s events were health screenings, immunizations, I.D. kits, fun activities and presentations of healthy life styles at some medical and dental booths.
Also, aproximately 1,000 free backpacks stuffed with crayons, notebooks and pencils were given out by Community Health Choice and the other sponsors, which included the YMCA, Summit Dental Center and more.
The Health Expo also included information and assistance with Food Stamps, CHIP and Medicaid. Some of the local organiztaions present were Bonding Against Adversity, Grandparents Raising Grandchildren and Mission Greenspoint.