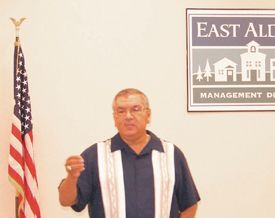 Agencies that partner with the East Aldine District attended a luncheon last Thursday at the District offices, and brought the group up to date on their current activities and programs.

Also speaking at the luncheon was State Senator Mario Gallegos, on issues that were brought before this session of the state legislature, and also the several redistricting maps that are currently being appealed in the courts.

The Senator spoke about the deep cuts in the budget, to education and health care. Education was cut by $4 billion from the previous 2 years, with an additional $1.4 in discretionary progams, and health care was cut $3 billion, including nursing homes and children’s health programs. He voted against the new budget, because he felt the state should have used the reserve or “rainy day fund” instead of allowing cuts to services.

Jeanette De Los Santos spoke about the help that her 2-1-1 service offers the public, and the fact that it operates 24 hours a day, 7 days a week, in all languages. 2-1-1 HELPLINE can offer emergency transportation, and advice on many social service programs and community resources. She said a current issue they are helping with is to stop electric companies from disconnecting service to customers not paying their bills.

Gretchen Larson and Virginia Bazan reviewed plans for the District’s 10th Anniversary celebration, which will be several events during the month of October. A special anniversary party for the public is planned on Oct. 22 in James Driver Park. Virginia and Shirley Reed reminded the group of the annual Fall Fest on Oct. 29th at the Sheriff’s storefront location.

Richard Cantu gave a report on East Aldine’s activities and projects. The Special Sales Tax election has been set for Nov. 8th, and if passed will allow the District to collect the 1 cent tax in a small area to the east of US59 that until now has been overlooked by all governing bodies. The voters must approve this, although most of the monies collected will be from customers outside the District, Cantu explained.

Also scheduled is the installation of 25 additional street lights, in areas identified by a survey of need. The new Public Health Committee will set up a “Hope Project” soon, to help elderly and needy with minor home repairs.

The District is sponsoring a Senior Dance at the Northeast Community Center, along with State Representative Armando Walle. Cantu also reported that the Water & Sewer work in Zone 11 east of US59 is underway. This is the largest project to date for the District, and will bring service to about 1000 homes.

END_OF_DOCUMENT_TOKEN_TO_BE_REPLACED 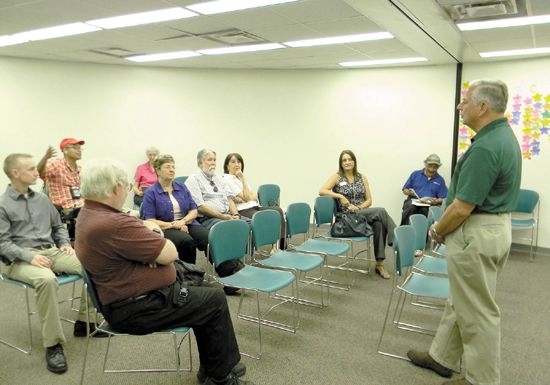 NORTHEAST— During the current Congressional recess, Congressman Gene Green has hosted a series of Town Hall Meetings where he discussed updates on legislature issues concerning the community and listened to citizens’ comments. The latest Town Hall meeting was last Saturday morning, at the Aldine Harris County branch library. A small but interested audience listened to Green’s legislative update, and then asked questions that in many cases related to their own situation. Also attending was State Representative Armando Walle, to answer state related questions.

One of the main issues discussed was the one affecting seniors and disabled. At this Town Hall Meeting, representatives from the Social Security Administration, Houston/Harris County Area Agency in Aging, and the center of Medicare and Medicaid Services were available to share and answer important information about health care, referral services and programs for seniors.

Another issue that a community leader brought to Gene Green’s attention was the production of unnecessary coins such as the $1 dollar coin. This person mentioned that with the economic recession, the Government should not be spending money on producing these coins that are worthless and not used by the public.

Other people were asking for some information regarding leasing apartments for the elderly and disabled. Congressman Green has team members who can assist people on these types of issues, and follow up their cases and situation; however, Green emphasized that not only during Town Hall Meetings can you talk with him, but “Our office is open for any questions or concerns you have regarding the federal government, and you do not need to wait for a district event to contact me. Another way to stay up to date with us is through our electronic newsletter, which is sent periodically and gives up to the minute information on legislative initiatives and district events.” To sign up for a newsletter, visit ct-me/newsletter” http://greeen.house.gov/contact-me/newsletter.

Green mentioned that not only has he conducted Town Hall Meetings and Senior Citizen Forums this last month, but he is also sponsoring a Paying for College Workshop and Academy Day for parents of college bound students on Monday, September 19th at the Aldine Senior High School, starting at 6:30 pm, and a Job Fair on Friday, September 30th starting at 9:00 am at the Campbell Center on Aldine Bender Road.