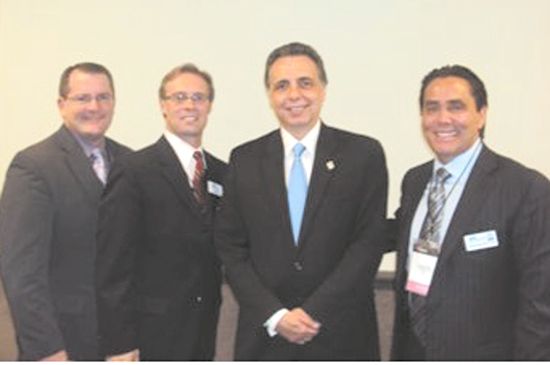 The Greenspoint District and the Houston Intercontinental Chamber of Commerce traveled to southern California recently to attend a convention and expo aimed at helping Mexican entrepreneurs expand or move their business to the United States. The Mexico Emprende Conference was held at the Los Angeles Convention Center and brought together a range of service providers, entrepreneurs, government agencies and companies interested in doing business in Mexico and the United States.

The Hispanic Business Center- HBC Executive Suites serves Mexican entrepreneurs who want to grow their business by breaking into the Houston market. The center, which is located in the Greenspoint District, can help accelerate growth of a company that is new to the United States by offering corporate offices for rent, a fully bilingual support staff and advisory support for business development. The Greenspoint District, along with del Valle and Houston Intercontinental Chamber of Commerce President Reggie Gray, hosted a booth at the expo and provided information about the North Houston market and the strengths of a Houston location.

“The Texas economic climate is very conducive to business development and growth right now,” said Gray. “The conference provided a great opportunity to encourage companies from Mexico and California to expand or relocate in Houston. It was incredible to see the enthusiasm by companies attending the event.”

The North Houston team was the only convention participant promoting an area outside of southern California or Mexico and therefore garnered a lot of attention.

“Our booth was packed,” said Lowry. “We brought 100 marketing kits and they were all gone by the end of the conference.”

Gray and del Valle hosted a seminar at the event called Houston: The Gateway to the Globe. The seminar focused on helping businesses further expand between Mexico and the United States. The north Houston team also had the opportunity to meet Mexico Secretary of Economy Bruno Ferrari during a lunch event. Both the Houston Intercontinental Chamber and the Greenspoint District have seen increased interest from international investors and business owners looking to grow their companies in Houston. The Greenspoint District is positioning itself to become a resource for international entrepreneurs and is stepping up its international marketing efforts. Gray has traveled to Mexico twice this year to meet with the Mexican business community and promote the area. Lowry also plans to travel to Mexico later this year.

“The Chamber continues to grow its international business approach and its international membership due to a changing global economy,” said Gray. “The economy and the business landscape have changed dramatically in the past five years. We have significantly grown our relationships with members now in Mexico, China, Japan, India, Canada, and several other U.S. economic partners.”