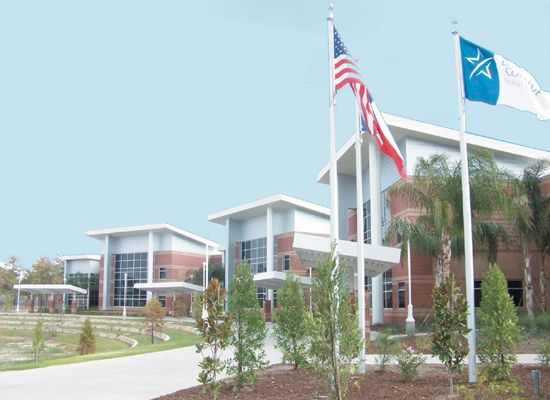 Lone Star College-North Harris held a grand opening ceremony on Thursday, Sept. 15 for its new full-service center, LSC-Victory Center, located in the northwest Houston neighborhoods of Acres Homes and Inwood Forest. The 85,000 square foot facility opened to students with the start of the fall semester and has expanded higher education options for the nearby communities. More than 1,300 students are already enrolled, which is a 55 percent increase compared to the previous fall at the area’s former facility, LSC-Carver Center.

Located on a 17-acre site at the corner of Victory and Vogel, LSC-Victory Center is home to diverse academic classes, essential workforce training in high-demand fields, and critical adult education such as GED preparation and English classes for non-native speakers.

“Our vision was about serving the community and having a partnership with the community. This facility is focused on education, but not just academic education. We also want to teach responsible citizenship, hard work, discipline and perseverance. What we are trying to do is give people the skills to be successful in college so that they can give back and be successful in the community,” said Dr. Steve Head, president of LSC-North Harris.

The site also houses the college’s partnership with Aldine ISD, the Victory Early College High School, where selected students can pursue a high school diploma and associate degree from the college simultaneously. Academy for Lifelong Learning and Small Business Development Center offerings solidify the center as a valuable resource for the entire community.

Dr. Richard Carpenter, chancellor of the Lone Star College System, spoke about the center’s impact on the community.

LSC-Victory Center, which is the first major construction project in an area seeking revitalization, was also recognized for the potential impact it can have on Houston’s workforce. In June, Lone Star College System announced that it had received a $1.4 million grant from the U.S. Economic Development Administration (EDA) to help build the LSC-Victory Center and establish a vocational training center designed to provide workers with the critical skills needed to compete for higher-skill, living-wage job opportunities.

The state-of-the-art center also offers several workforce specific training labs. These labs allow the center to offer hands-on training in high-demand fields such as HVAC and welding. Students in these programs can gain the skills needed to start a new career, often in just 12 to 18 months.

“We are trying to get students in and out with training that pays a good salary. We’ve set the program up so that they can come through that piece of it and get out of it in about a year. Then, if they want to come back later and get a college degree we can articulate those classes back and help them reach that goal as well,” said Dr. Head.

“LSC-Victory Center certainly showcases the many opportunities that Lone Star College System offers. It has all of the offerings that make up the core of the community college mission,” he added. 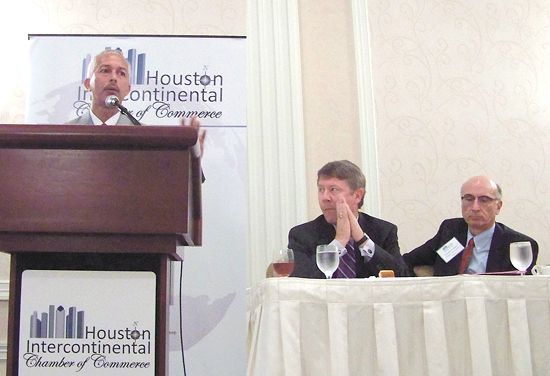 NORTHEAST– The Houston Intercontinental Chamber has lined up several blockbuster events for the next few months. Last Thursday the Transportation Summit was one of these, as hundreds of city and county leaders gathered at the Marriott Hotel Airport, to hear three experts talk about transportation trends in their respective fields.

Each speaker not only talked on the technical aspects of their transportation knowledge, but also on how the national and local economy relate to, and benefit from, an advanced and integrated transportation system.

The chamber president, Reggie Gray, welcomed guests and members, and spoke about the Chamber’s 25th anniversary year, and the Starlight Business Awards banquet to be held on Nov. 10th. He reported briefly on the California Expo attended by Greenspoint leaders, contacting potential international businesses to locate here. To emphasize the international aspect of our chamber, he said we now have a working relationship between the Dubai Airport Freezone and HICC and NHEDC. Also, he invited everyone to the next HICC event, which is a Healthcare Summit on Oct. 6th, taking place from 8:30 a.m. to 1:00 p.m. in conjunction with the Houston Northwest Medical Center. The featured speaker will be David Cordani, CEO of CIGNA Corporation.

The Transportation Summit included a review by Judge Emmett of the County’s role in transportation. With 2 million people living outside Beltway 8, moving them is a major responsibility.

Current road projects include extending the Hardy Toll Road into the center of Houston, and completing more segments of the Grand Parkway (Hwy 99).

Rail projects include developing the Hempstead line, possibly as far as Austin, and the Galveston Line along Hwy. 3. He emphasized that it must tie into the METRO system to be most efficient. Also being studied is high speed rail from Houston to DFW in Dallas.

Emmett emphasized that all of these projects are necessary, but the main problem will be how to pay for them, and we must act now to prepare.

METRO’s Greanias spoke on the large service area his agency is responsible for, 1,300 square miles, with an employment population of 4.5 million people by 2040. In addition to 2 new light rail lines, his budget includes many street and road projects in local jurisdictions.

Diaz spoke about Airport projects, including the plans to improve Ellington Field as well as the two passenger airports.

Diaz said that most of the growth in airport business has been global travel and shipping. In the last year, for instance, there was 0% growth in domestic traffic, but 5% growth in international traffic. This trend is expected to continue, with more airlines, such as Southwest, looking at international flights for revenue production. To prepare for larger planes, Intercontinental airport will have to enlarge to receive the A380 Airbus, which cannot now land at IAH. However, the new Boeing 787 and 747-800 can be accomodated now.

Diaz emphasized that all of this growth must be adequately funded to happen. From the audience, Greenspoint’s Jack Drake reinforced the idea that the public must become advocates to the legislature for more adequate transportation and public transit funds.