Over 150 volunteers de-littered the parks trails and paths as well as the detention lakes, filling over 100 bags with plastic water bottles (which were then recycled) and other trash.

For information about how to organize a community clean-up and/or to volunteer with the East Aldine District, contact Richard Cantu, Director of Services at (713) 595-1220. 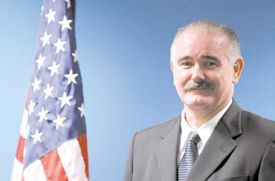 A replacement has been named for Precinct 4 Comissioner Jerry Eversole, who gave up his office in the wake of legal turmoil a few weeks ago.

Harris County Judge Ed Emmett has given the post to R. “Cactus Jack” Cagle, a civil court judge for more than a decade.

Eversole has been in and out of the courtroom for several years, embroiled in charges of official corruption and bribery stemming from his business partnership with county contractor Michael Surface. After more than two decades in office, Eversole stepped down and pled guilty to one count of lying to federal investigators at the end of September.

Cagle, a graduate of Rice University, was sworn in during the Oct. 4 meeting of the commissioner’s court in Houston. Cagle has sat on the bench of Harris County Court-at-Law No. 1 since being elected in 2000. He has earned some of the highest ratings from the Houston Bar Association and has garnered several awards from local groups during his tenure on the bench.

“During this process, my goal was to find someone who could best serve the constituents of Precinct 4,” Emmett said in a press release. “I met with and spoke with dozens of folks in the community about the Precinct 4 commissioner’s position in recent weeks. Jack quickly emerged as the top candidate because of his mature judgment, keen intellect, unquestioned integrity and his many years of work in the community.

“He will serve the residents of Precinct 4 with great passion and hard work, and I genuinely look forward to working with him in the years to come.”

Approximately 70 people had their names in the running, but Emmett said in a press conference that he had considered around a dozen of those names for personal interviews. Cagle impressed Emmett with his professional demeanor, and he considers Cagle to be a good candidate for election in 2012, Emmett said during that conference.

“I appreciate Judge Emmett’s faith in appointing me to represent more than 1 million of my friends and neighbors in Precinct 4,” said Cagle in the release. “I am keenly aware of my new responsibilities, and I promise to work as quickly as possible to acquaint myself with the area’s ongoing projects and to hear from as many of my new constituents as possible.”