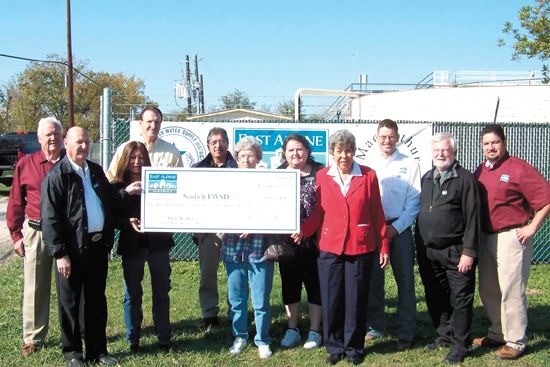 EAST ALDINE– The capacity for new sewer hook-ups in the Aldine area increased dramatically this week, as the Sunbelt Fresh Water District put into service a rehabilitated sewage plant facillity on Gloger that has been out of service for several years, due to aging and required upgrades.

The work was accomplished by a grant from the East Aldine District, according to Scott Bean, EAMD Public Infrastructure Manager. The grant was in the amount of $1,631,198 and will allow the District to control 93% of hook-ups to the plant, or 2952 homes or their commercial equivalent.

As pointed out in the transmittal letter to the board from Sunbelt Engineer Jim Ainsworth, the resulting 990,000 gallons of wastewater capacity per day is being achieved at a cost of $1.76 per gallon, as compared with $4 to $5 per gallon if the plant had been built new.

Bean reported to the board that this new capacity will ultimately be used to serve single family homes in the treatment plant service area that currently have septic tank systems.

Ainsworth revealed that it will also allow loads at other nearby Sunbelt sewage plants to be balanced and offloaded to this plant, since they are interconnected. Some of these are nearing capacity.

Sunbelt currently operates six sewage treatment plants in the area. In November 2010 they received a loan from the Texas Water Development Board for $10,440,000 to build replacement sewage treatment facilities at their Woodland Oaks and Oakwilde sites. At that time, customers were paying an average of $73.48 per month for combined water and sewer services. Sunbelt currently serves a total of 7601 water customers, and 6576 sewage customers.

The criminal complaint, filed today, charges Rene Salinas Saenz, 34, Jesus Alvarado Galvan, 34, and Otoniel Botella, 34, all of Houston; along with Jose Alberto Barrera Jr., 31, Jorge Luis Flores, 33, Jose Hinojosa-Galvan, 31, all of Roma, Texas; and Luis Faustino Garcia, 51, from Mexico, with conspiring to possess with intent to distribute a controlled substance involving more than 100 kilograms of marijuana.

The arrests follow a month-long undercover investigation during which an undercover agent posing as a truck driver was hired by Barrera to drive a trailer loaded with marijuana from the Rio Grande Valley area to Houston. The complaint alleges that the undercover agent was provided with the loaded trailer and instructions to drive it to Houston where Barrera would take control of it. On Nov. 15, 2011, Barrera picked up the tractor with the attached loaded trailer.

According to the complaint, the men unloaded the marijuana from the trailer at a property located on the 13200 block of Reeveston in Houston and loaded it into two separate vehicles. The individuals then drove away from the property with the marijuana loaded within, at which time they were stopped by law enforcement officers and the marijuana was seized.

The seven men taken into custody yesterday are expected to make their initial appearances before U.S. Magistrate Judge George C. Hanks Jr. later today or tomorrow. At that time, the court will determine whether the defendants will be released on bond or remain in custody at the request of the United States pending preliminary and detention hearings.

If convicted of the conspiracy offense, the defendants each face a mandatory minimum punishment of five years to a maximum of 40, without parole, and a $5 million fine.

The case is being prosecuted by Assistant United States Attorney Eric Smith.

A complaint is an accusation of criminal conduct, not evidence. Defendants are presumed innocent unless and until convicted through due process of law.