TxDOT studies improvements of I-45, Hardy roadways in future 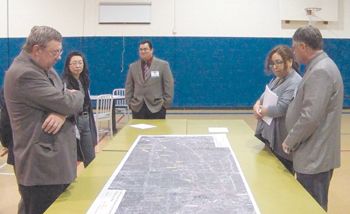 The community was invited to two public meetings last week, to comment on TxDOT plans to increase the number of lanes between Downtown and Beltway 8, to ease current and future traffic congestion. The project is officially entitled North Houston Highway Improvement Project. The meeting is part of a required EIS (Environmental Impact Study).

Meetings were held at Jeff Davis High School on Tuesday night, and Aldine High School on Thursday night. The purpose of the meetings was to involve the public in the planning process, and to present information about the history of the project, to explain the environmental review process required, to present a possible timeline, and to invite comments on two draft documents available at the meeting and online.

TxDOT showed a 7 minute slide presentation to start, covering the major points in the study. Their premise is that as population and employment in the Houston area increase, they will contribute to additional traffic congestion on IH45, which is currently classified as serious to severe. The proposed project would alleviate this congestion, they said. In addition, work would bring the roadway up to current design standards, improving safety and efficiency. The design would also improve the ability of the roadway to function for evacuation events.

The costs and sources of funding of this work have not been determined.

The TxDOT officials said that the study will include alternatives, including a “no-build” alternative as required by federal standards. It will also include managed lane/toll alternatives.

Present in the presentation room was Barry Klein, observing the process. Klein is an advocate of NO expansion, saying that TxDOT exaggerates the problem for the purpose of justifying more roadway lanes. He posits that congestion always levels off at optimum levels on existing roads, and drivers find alternatives on their own.

TxDOT wants comments submitted from the public by Dec. 5th to be incorporated in the first report. These can be submitted by email to HOU-piowebmail@txdot.gov, and more information is at www.IH45northand more.com. Mail address is PO Box 1386, Houston, TX 77251.