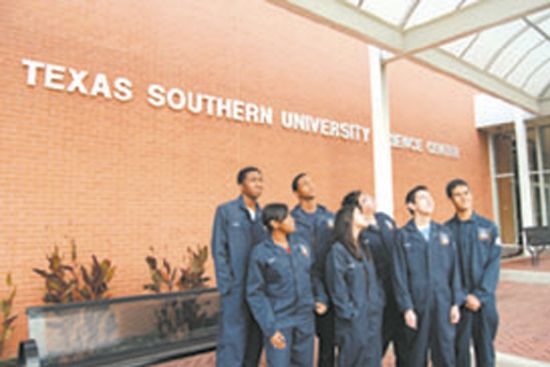 A number of area students got the chance to see the aerospace industry up close recently through their participation in a high-intensity weekend program.

Representatives in the fields of airplane piloting, navigation, air traffic control and more were on hand to give the students a first-hand glimpse into the type of work they do, and teach them what it takes to make it in the science and mathematics industries.

It is an exclusive program; only 50 students from across the Houston area are selected each year. Those selected receive top-level training in STEM subjects —ÿscience, technology, engineering and mathematics, in addition to a stipend and a personalized flight suit.

END_OF_DOCUMENT_TOKEN_TO_BE_REPLACED 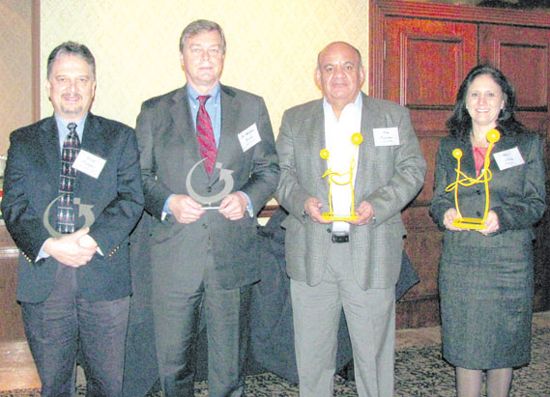 The Greenspoint District recently celebrated its 20th anniversary with a breakfast recognizing its founders and honoring the community and corporate partners who make the district a better place to live and work. District board Chairman James Curry of Hines, and Vice-chair Michelle Wogan of Transwestern, joined President Jack Drake in awarding outstanding community servants for 2011.

Greenspoint Company of the Year went to Mazak, a machine tool manufacturer which recently opened a new facility in Greenspoint in June 2011, electing to stay within the district when they outgrew their previous facility.

Alejandro del Valle, owner of Contact Line and the Hispanic Business Center, was named International Partner of the Year for his efforts in attracting Latin American companies to Greenspoint.

Recently retired TxDOT District Engineer Delvin Dennis was named Partner of the Year for his work in keeping traffic flowing through Greenspoint.

And Michelle Wogan, who has been on the board and chair of the district’s Marketing & Public Affairs Committee for 15 years, was named Volunteer of the Year.

Several district board members received service awards for their years on the board. Recognized for one year of service were Jerry Paduano of Hilton Houston North, Michael Downs of Sysco Corporation, Dr. Stephen Head of Lone Star College – North Harris, and Robert Martinez of Rockstar Capital Management.

Earning awards for five years of service on the Greenspoint District board were Anne Seeley of United Airlines and Ray Bejarano of Greenspoint Mall.

In celebrating the 20th anniversary, Drake recognized district founder Tom Wussow and several early board members. In attendance were the district’s first and third board chairs, Dale Bowman and Joyce Harberson, respectively, and founding board members Joe Ramirez and Milton Graves. Another early board member, Randy Creech, attended the celebration as well.

The district’s volunteer reception began 19 years ago as a way to acknowledge individuals and organizations whose partnerships and efforts significantly enhance or expand programs in the Greenspoint area.