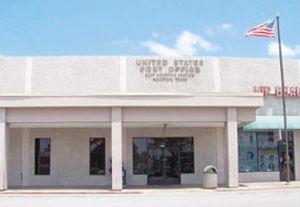 NORTHEAST– Local residents are concerned about the permanent closing of the East Houston Post Office Station located at 9604 Mesa.

“There is a sign at the door that says they will close permanently on January 13,” said Sylvia B. Williams, North Forest School Board member, who has contacted several community leaders including Rep. Sheila Jackson Lee to resolve this issue but until now, there are no positive results.

Mrs. Williams said this is a community concern because there will be no post office in their area, the closest one is Roy Royal, “we can ride by bus but still far from here,” she added.

The rumor of the closing of East Houston Station goes back to May, 2011 when unofficial reports from several sources indicated to the Northeast News that the future plan included closing the East Houston Station. Now, Postal officials have officially posted a sign to the public about the changes.

Effective: Friday, January 13, 2012 The East Houston Station will permanently close their Retail Lobby for operations at 5 p.m. P O Box Service will continue at this location until further notice. Dutch Door Service is also available for pick-up of certified, packages, etc. from 6:00 a.m. to 5 p.m.

Here is a list of alternate locations to buy stamps and mail packages: