METRO cancels bus routes; Aldine is on the list 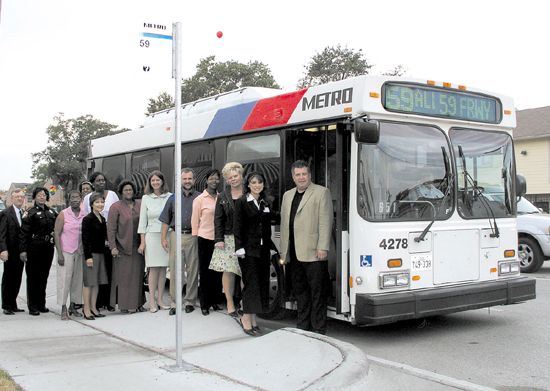 NORTH HOUSTON– METRO released a statement last Thursday, stating that a number of bus routes would be discontinued, including three that service the East Aldine area: 39, 59, and 60.

Contacted by the Northeast News, community leaders Congressman Gene Green, and State Representative Armando Walle, indicated this was not an acceptable plan, and would contact METRO for alternatives.

The Route 59 services a number of facilities which the public needs access to, including the Social Security offices, the Harris County Health Clinic, MacArthur High School, and High Meadows Library. Many persons do not have alternate means to reach these locations.

On January 26, 2012, The Metropolitan Transit Authority released the following statement:

“The new METRO is very serious about listening to the community in order to provide first-class transit. This process is a perfect example of that spirit,” said METRO Chairman Gilbert Garcia.

METRO held three community workshops to discuss possible service solutions for the aforementioned routes, which generated a high number of comments at the agency’s Dec. 5, 2011, public hearing. The sessions, strongly attended by 320 persons, combined, resulted in the submissions of more than 140 comments. Staff will continue to work with the impacted communities to come up with efficient service that fits their needs and the agency’s, but moving forward, the current routing of the 30, 48 and 49 will remain the same.

“I appreciate everyone who came out to our workshops so that we could hear their suggestions. As the community changes, we need to change to meet the needs of the community,” said George Greanias, METRO president & CEO.

The service changes originally scheduled for January will go in effect February 26, 2012. The changes include adding or deleting stops, adjusting routes and the discontinuation of seven consistently low-performing routes: (which includes Aldine’s 39, 59 and 60)

Information regarding the service changes will be placed on all buses, impacted bus stops as well as METRO’s website.