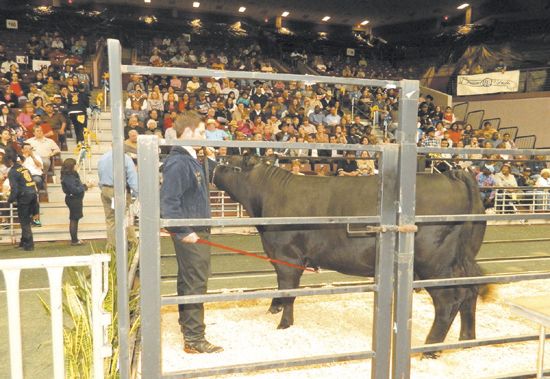 The money raised by AISD ag students is theirs to use for college scholarships or to fund future FFA projects during the 2011-12 school year.

Nimitz High senior Tyler Kelch raised the grand champion steer for the third consecutive year. His steer was purchased by A Contact Electric Rentals, LP, for $16,000, the same amount and same buyer as last year. 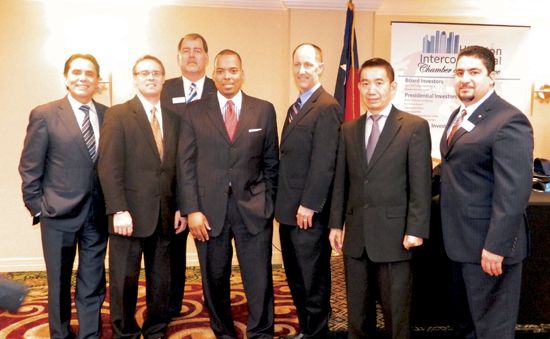 NORTH HOUSTON– The Houston Intercontinental Chamber held a powerful and fact-filled Economic Forum last Thursday, at the Airport Marriott Hotel. A large group of businessmen, community leaders, entrepreneurs, and chamber members listened to two seminar speakers, and two keynoters discuss the current and future state of the economy in the nation, Texas and the North Houston areas.

The seminars started in the morning with an emphasis on international trade opportunities. Mr. Alejandro De Valle, president and CEO of the Hispanic Business Center, which now offices in the Greenspoint district, presented facts and potentials for trade with and business opportunties with Mexico and Latin America.

Although he stressed the large market and robust manufacturing capabilities in Mexico and Latin America, he also cautioned about security risks and business customs that must be recognized and dealt with properly. He recommended that U.S. businesses should partner with Hispanic agencies that can help negotiate local conditions.

Mr. Juan Carlos Yu, president of the U.S. Chinese Chamber, presented a picture of the Chinese market, and noted differences in business practices and cultural customs in Asia compared with the United States. However, he noted the growing number of Chinese residents and businesses in the North Houston area, a sign of the strength and interest of Chinese with their American counterparts. He thought their was a great potential for both entities to prosper from a proper business relationship.

The Economic Forum continued through the lunch hour, with keynote presentations by Robert Wood, Director of Economic Development and Analysis for the Texas Comptroller’s office, and Ronald Green, Controller for the City of Houston.

Mr. Wood noted signs of an economic upturn in Texas, and to some degree in the nation.

These signs include business inventories increasing, and employment numbers up also.

Texas economy is better than the rest of the nation, he said, for many reasons including a favorable weather climate, a developed port and airport, a strong oil and gas business, and diversification.

Signs of the strong Texas economy include lower unemployment and sales tax collections up 9.5% from last year. He suggested the website www.thetexaseconomy.org for details.

City Controller Ronald Green had facts on the efforts to restrain expenditures due to reduced city revenues. However, he also saw a strong economy with most indicators up, forecasting future growth and prosperity in the local markets. 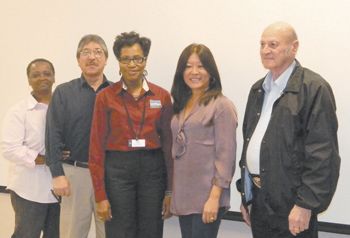 NORTHEAST– The East Aldine District board held their annual budget workshop on January 27th, planning the projects for the coming year.

The workshop was led by executive director David Hawes, with assistance from the staff of Hawes Hill Calderon.

The District will have additional monies to spend this year, with sales tax collections increasing to an estimated $3.8 million. Last year they were $3.4 million. This money is directed to projects in the 10 Year Service Plan, which may now require an update from the 2001 version. Much of the budget each year goes for Public Safety and water and sewer projects, both of which are basic to Economic Development in the district.

In addition, the district uses seed money to leverage other entities to build improvements. For instance, a total of $8 million has been brought into the district for street and water projects. None of this was local tax revenue, according to Hawes.

A thorough revue of the district’s budget and goals will be presented in an upcoming issue of the Northeast News.

The Airline Improvement District Board of Directors is working in conjunction with the Houston-Galveston Area Council (H-GAC) and Harris County Community Services Department on a Livable Centers study aimed at facilitating the creation of a vision plan to provide multi-modal transportation options, improve quality of life for the residents of the District, and promote economic development. The first public workshop for the study is this Thursday, February 9, 2012 at 6:30pm at Carroll Academy (in the school’s cafeteria), 423 Gulf Bank Rd. Houston, TX 77037.

This Livable Centers study is the first step in a process to seek funding for projects in the area identified by the community as high-priority. The Project Team, selected by H-GAC, consists of SWA Group, Inc. leading the overall effort, with the support of sub consultants such as Knudson, LP for public outreach, Transportation Alliance for traffic modeling, and CDS Market Research and Spillette Consulting for demographic and market analysis.

The Project Team will host a series of three public workshops over the next five months in an effort to have as much direct input from the community as possible on which projects the community would like to see come to fruition. In addition, the Project Team is working with administrators at Carroll Academy, Stovall Middle School, and Aldine Senior High School to involve their students at various levels in the study process.

The first public workshop will be held to gather community input on the following basic questions: What changes or improvements within the District would make your daily life better? How do you envision the District in the short- and long-term? What projects would you consider high priority to pursue? The format of the first workshop will include stations where participants may suggest METRO bus routes, complete opinion surveys, and work interactively with the Project Team to show on a map of the district areas where they see potential for improvement. Refreshments will be provided for attendees, activities will be provided for children, and there will be three chances to win a $50 gift card to local favorite Dee Dee’s Pie shop! Spanish-speaking members of the project team will be present, and all written materials will be provided in Spanish as well.