HOUSTON,TX Feb. 3, 2012 – State Representative Armando Walle (D-Houston) recently called on the CEO and Board of Directors of METRO to reconsider the planned cancellation of the 59 Aldine Mail Crosstown and 39 Parker Circulator bus routes.

“I am concerned that the cancellation of these routes will make it extremely difficult for members of our community to access necessary services, like those provided by the Aldine Health Center, the Social Security offices and Santa Maria’s Bonita House,” stated Rep. Walle. “In failing to provide adequate transportation options, METRO only creates additional roadblocks, including increasing the time and cost of transportation, for area residents who rely on the vital services provided by these community partners.”

With METRO’s proposed cancellation of the 59 Aldine Mail Crosstown, a sick person living near Aldine Senior High School would have to ride on the bus for almost 2 hours and then walk over a half-mile to see a doctor at the Aldine Health Center, while currently the trip takes between 15 and 20 minutes followed by a short walk. A routine trip to the Social Security office from the Aldine Senior High School neighborhood would also take two hours with additional walking, while currently it is also about a 20 minute trip.

With the cancellation of the 39 Parker Circulator, residents along the route, like those at Santa Maria’s Bonita House, a residential treatment facility for women and their children, will be without any meaningful public transit options. Service to this area is already greatly reduced, but current service still allows residents of the facility a chance to travel to and from work while receiving essential care at the facility, enabling them to have an opportunity to build a better life for their families.

Rep. Walle proposed that the Authority, instead of cancelling routes, look into creating better transportation efficiencies by reduced scheduling or combining routes in this area, explaining, “While I understand the difficult budget constraints METRO is facing, and I appreciate the manner in which the Authority provides more with less, cancelling these two vital avenues of transportation is neither an effective nor efficient long term option for METRO, its passengers, and our community.”

Since METRO recently announced their intention to eliminate the 39 Parker Circulator and 59 Aldine Mail routes from their service area, Rep. Walle has set up a meeting with METRO CEO George Greanias and various other METRO board members to see if a workable solution to save the routes can be reached. 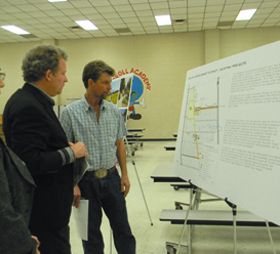 The Airline Improvement District Board of Directors along with the Harris County and other entinties are working together in a study project that would help facilitate the creation of a vision plan in order to improve quality of life and economic development for the community.

Residents of the area answered an opinion survey anonymously about transportation and things they would like to change or improve in their community.

During this workshop, participants also suggested METRO bus routes according to their needs and work interactively with the Project Team to show on a map of the district areas where they see potential for improvement.

One of the public concerns is extremelly heavy “traffic by Gulf Bank specially on Sundays,” said one of the participants. Another concern is not enought lighting on the streets. Teens focused on parks and recreation improvements.

The District plans has scheduled two more public meetings to discuss community improvements ideas. The next meetings will be Thursday, March 22, 2012 and Thursday, May 17, 2012 both meetings will start at 6:30 p.m. at Carroll Academy, 423 Gulf Bank, Houston, TX. 77037.

If you may have any suggestions and/or questions, please contact the district at tkoenig@knudsonlp.com