East Aldine METRO route is back 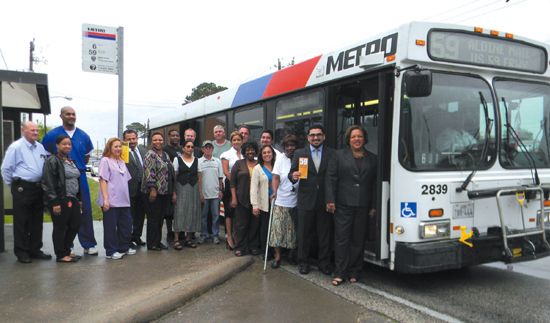 (April, 2)–This morning, the 59 Aldine Mail Crosstown bus began service again, the result of our partnering with the East Aldine District.

The event was marked by district and METRO officials, along with community leaders, gathering for ÿphotos to celebrate.

The bus route was one of seven that METRO had discontinued in February because of low performance. METRO management continued meeting with the East Aldine District to find a way to provide service and be a good steward of taxpayer dollars.

“As a result of those meetings, and the leadership and financial support of the East Aldine District, transit-dependent residents can look forward to service for the year,” said George Greanias, president & CEO of METRO.

Richard Cantu, director of services at East Aldine District, said he and District Board Chairman Gerald Overturff are glad to see the 59 route back on the road. “I think it was important that we gathered there at the health center to recognize the importance of its relaunching, considering it’s probably one of the most important services the community needs – health services,” said Cantu.

The route goes right by the Aldine Community Health Center, as well as two libraries, a Social Security office and nine schools within a quarter of a mile of the route.

ÿ”As we took photos to promote the event, we had several patients get on the bus and off the bus to their medical appointment,” said Cantu.

The district contributed $30,000 to help subsidize the cost of running the 59 Aldine route. “It came down to economics,” said Cantu of the canceled and then reinstated route. “In the interest of providing mobility for the community and to bide some time to figure out how to build the ridership, District Board Chairman Gerald Overturff offered to bring a resolution before the board to provide a subsidy …for a year.”

Created by the state legislature in 2001 as the East Aldine Improvement District, the district receives revenue from a one-cent sales tax and is charged with improving public safety, mobility and transportation, water and sewage infrastructure and environmental and urban design. It has a $3.3 million annual budget.

END_OF_DOCUMENT_TOKEN_TO_BE_REPLACED 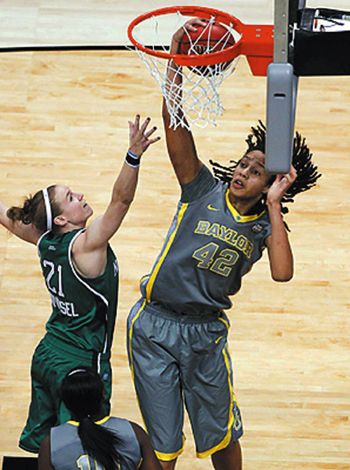 Griner, a 2009 graudate of Nimitz Senior High School, scored 26 points, grabbed 13 rebounds and had five blocked shots to lead the Lady Bears to an 80-61 win over Notre Dame in the title game. In addition to leading Baylor to the national title, she was also named the Most Outstanding Player of the tournament.

Baylor finished 40-0 on the season and became the first women’s team in NCAA history to win 40 games in a season.