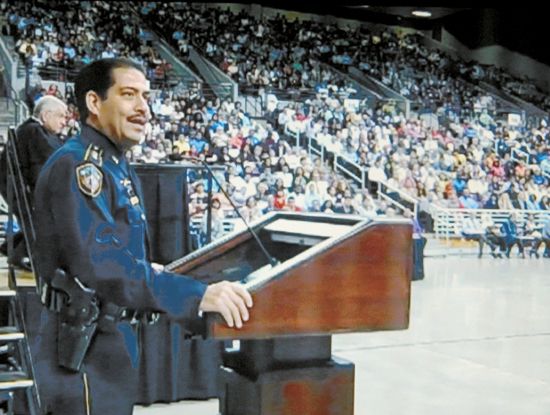 “I know you have sacrificed. I know you have worked hard to get to this particular point. But as I learned from my parents, the easy part has been done. The hard work now begins,” Sheriff Garcia said as a guest speaker at a U.S. Citizenship and Immigration Services ceremony at the Aldine Independent School District’s M.O. Campbell Education Center.

“I asak you to continue to be the ambassadors that you are. I need you to encourage others like you, like my family (was), to work hard to complete their (citizenship) journey to this country,” the sheriff added.

Sheriff Garcia recounted in his speech how his parents and five siblings moved from Mexico City to Houston in 1959 as legal immigrants and later became naturalized citizens.

“I hold dear to my heart the travel, the sacrifice, the hard work they endured to get to this country and to be role models of American citizens that they have been,” he said. “And that’s why I believe I am able to stand here today as the sheriff of this great county.”

Sheriff Garcia, the youngest of six children, was born and raised in Houston.