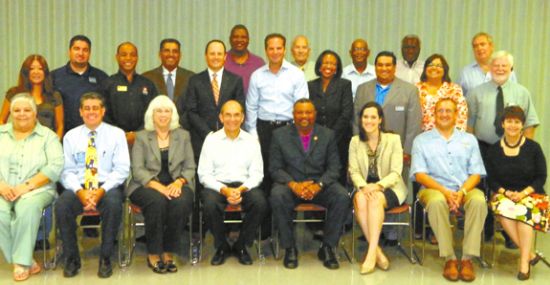 Aldine Education Foundation’s steering committee announced the addition of new members to the permanent board at its last meeting on June 7th, and detailed committee assignments and restated long term goals. They also were able to announce several large grants that will be received in the future. Organization work is being led by the consulting firm of Foundation Innovation. At the meeting, AISD superintendent Wanda Bamberg noted the goals of the foundation, to “enhance the school district, with teacher improvement and scholarships.” Laurie Cromwell of Foundation Innovation further defined that as providing programs that tax dollars do not pay for, funding innovative programs, supporting underfunded programs, and providing scholarships and teacher or academic excellence recognition.

The Foundation would like to raise its funds without galas or other “death by event” type functions. Instead, it would seek support from a database of donors and grant sources.

Originally the plan was to raise money by the end of the year, 2012 when the foundation is organized and functioning. Laurie Cromwell of Foundation Innovation said that a typical goal for a district this size would be 100 to 250 thousand dollars the first year.

At the June 7th meeting however, it was announced that major grants of $350,000 each had been designated by the Brown Foundation and the Arnold Foundation.

The Education Foundation has elected officers, as follows:

It was noted that Seth Sharr is also president of the Aldine Scholarship Foundation, and there was some discussion about how the two organizations would work together and not overlap functions. ASF has the goal of providing scholarships for Aldine ISD students that will attend Lone Star College, and AEF will provide funds for other scholarships and activities.

Five new members were added to the board at this meeting: Lisa McBride, John Cornett, Jocklynn Keville, Gilbert Hoffman, and Richard Cantu.

The Foundation has filed for IRS state as a 501c3 nonprofit entity, and expects that ruling to be finalized soon.

Between now and the end of the year, organization and fund raising will continue. The board meets once per month.