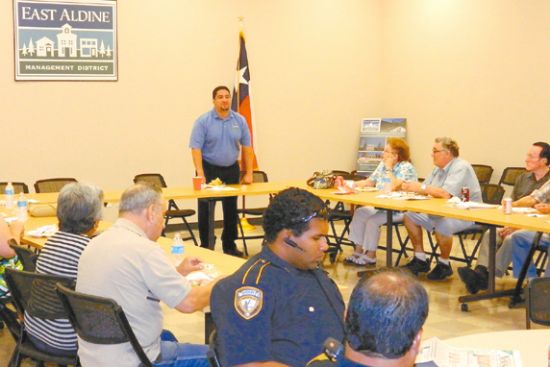 The East Aldine Management District held its quarterly Community and Civic Forum Thursday night, with about 30 community members in attendance. The gathering provided a forum for residents to voice concerns and communicate with members of the sheriff’s office and the management district.

Director of Services Richard Cantu conducted the forum, which was held at the district office, 5333 Aldine Mail Route.

James Norred, of the Harris County health department, discussed nuisance abatement issues, which are investigated by Harris County Public Health and Environment Services. HCPHES has launched a new computer-based program to report nuisances where all complaints go directly into a database that all health department inspectors have access to.

HCSO Sgt. Danny Garcia discussed happenings in public safety. East Aldine has contracted with the deputies to work crime patrol, namely in the form of the sheriff’s pro-active unit, which is made up of four deputies tasked with working directly in the neighborhoods to patrol and target crime areas.

When attendees complained about the lack of response from the sheriff’s department, Garcia responded by saying that because of the few numbers of deputies and high number of calls, it is impossible for responses to be immediate.

“[My deputies] are here for you, and they’re not lazy by any means,” Garcia said. “But you’re not gonna see my four guys everywhere all the time. It’s just not going to happen. There are not enough deputies to go around in Harris County and that problem is nation-wide.”

Cantu also informed attendees on the budgeted Adopt-a-Dumpster program, which provides dumpsters to residents if they want to organize a community clean-up, and the expansion of the management district to the north, specifically past the Sam Houston Parkway.

Cantu mentioned the expansion of water and sewer services, and signage and landscaping projects.

According to Cantu, the biggest project is a $8.5 million water and sewer project in Zone 11, south of E. Mt. Houston, and a $10.5 million grant to the East Aldine District to complete the project with service lines that will benefit more than 1,000 properties in East Aldine.

Other activities include the widening of Aldine-Westfield and the addition of 50 new street lights, mainly in areas where kids get picked up by school buses. 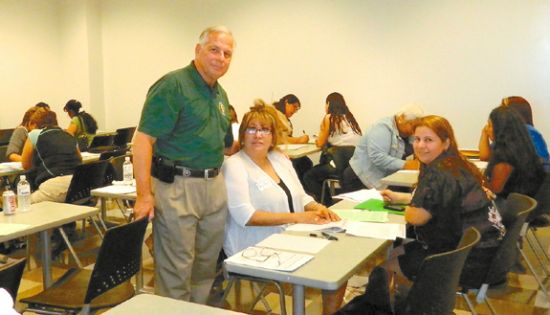 It was an important day for several hundred aspiring citizens to be, as they attended Congressman Gene Green’s 18th Annual Citizenship Day last Saturday, June 23. The event was held at the Houston Community College Northline Campus, on Fulton Street.

Almost 300 persons came to receive help with paperwork and directions to file for their permanent status as a U.S. Citizen. On hand to assist were about 60 volunteers, many of whom come every year. They represent HCC-Northline staff, LULAC Council 4957, LULAC Council 18, and H.O.P.E. (Hispanic Organization of Postal Employees).

Congressman Green told the Northeast News that “We’re glad to have been able to ehlp People realize their dream to become a citizen of the United States.”

Applicants had to be legal residents for over 5 years, or married to a US citizen for 3 years, able to speak and read English, and pay the processing fee of $680.