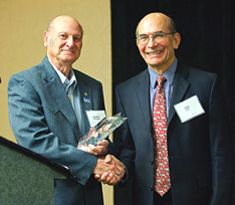 NORTHEAST – The East Aldine District was thanked for their support of the Aldine Scholarship Foundation with a huge luncheon, held last Wednesday, Sept. 12th at the Hyatt North Hotel.

Receiving an award from ASF was the East Aldine chairman, Gerald Overturff. In turn, EAD showed a video of the accomplishments the district has brought since its inception in 2001, in line with its Service Plan to improve the quality of life in the district. Overturff mentioned that the district recently purchased a large tract of land in the center of his district, with the intent to build a Town Center that would include a facility for Lone Star College. He thanked his board and the Hawes Hill Calderon firm for their help in bringing improvements to the district.

Also speaking at the ceremonies were Harris County Sheriff Adrian Garcia, thanking the district for its support of his department, and Aldine ISD superintendent Wanda Bamberg, announcing a major change in the relationship of ASF to the Aldine school district.

The Aldine community bid farewell to the Aldine Scholarship Foundation (ASF), and welcomed the Aldine Education Foundation during the luncheon at the Hyatt North Houston Hotel on Wednesday, Sept. 12.

Aldine ISD Superintendent Dr. Wanda Bamberg announced the formation of the Aldine Education Foundation at the ASF Community Star Luncheon, held in honor of the East Aldine Management District for its enhancement of the physical, social and economic well-being of the Aldine community over the last 11 years. East Aldine District recently contributed $60,000 to the ASF permanent scholarship endowment fund, for scholarships to students within the district. The event also served to raise additional contributions for ASF.

Bamberg informed attendees that ASF will fall under the Aldine Education Foundation umbrella and will continue to provide scholarships to Aldine ISD graduates to attend any college in the Lone Star College System.

Since its inception in 1991, ASF has provided 937 full-tuition scholarships to AISD graduates. As of spring 2012, ASF has more than $2 million in assets.

“The fund will continue to be restricted to providing scholarships for Aldine ISD graduates to attend Lone Star College,” Bamberg said. “Fifty-three percent of students who graduate from Aldine ISD will attend college. Most of them will attend Lone Star College to earn an associate’s degree or as a gateway to four-year colleges and universities. ASF has meant so very much to our school district through the years.

“ASF is an amazing story. The idea of the Aldine Scholarship Foundation began with a few individuals sitting around a table and putting a few dollars to provide college scholarships. One of those individuals is with us today, Stan St. Pierre, who is here with his wife. Stan and others saw the vision of the Aldine Scholarship Foundation and what it would mean to Aldine graduates.”

Bamberg added that the Aldine Education Foundation would expand opportunities for students to attend other colleges and universities in addition to Lone Star College.

“The new foundation will also provide grants for teachers to fund innovative classroom projects that we cannot afford. Individuals who wish to contribute to the Aldine Education Foundation will still be able to give to the scholarship fund for students to attend Lone Star College, or to provide scholarships for students to attend other universities.”

Seth Sharr and Terry Williams of H-E-B serve as co-presidents of the Aldine Education Foundation. Sharr said he is excited about the new foundation and believes it will provide additional opportunities for Aldine students and staff.

“The Aldine Education Foundation will provide more scholarships for Aldine students and reward teachers who take on innovative challenges in the classroom,” Sharr said. “I’m very excited about the Foundation because it’s going to help the district replace assets it has lost over the last few years due to cuts from state funding.”

Story by AISD’s Ben Wilson, and Gilbert Hoffman of the Northeast News.