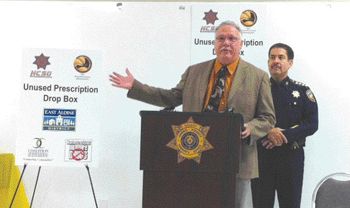 (HOUSTON, TX) Sep. 26, 2012 — Sheriff Adrian Garcia and the Harris County Sheriff’s Office (HCSO), along with the Drug Enforcement Administration (DEA), the Coalition of Behavioral Health Services, and Houston Crackdown, announced the establishment of a permanent prescription drug drop-off location at the HCSO Aldine Storefront, located at 5202 Aldine Mail Route, at a news conference on September 26, 2012.

Sandy Olson, Executive Director of the Coalition of Behavioral Health Services, organized the first medication take-back in Houston at a local grocery market in February 2010. When the DEA began hosting national take-back events shortly thereafter, her Coalition along with many other organizations and law enforcement agencies in the Greater Houston area joined in to support the DEA in this groundbreaking effort. Temporary drop-off locations have been set up twice a year since 2010, but the location at the HCSO Aldine Storefront is the first permanent drop-off in Harris County.

“This is an example of what can be accomplished when community organizations partner with law enforcement,” said Sheriff Garcia. “The destruction of unused and unwanted prescription medication is something I’ve advocated for since my days at city council. I’m proud to announce the Sheriff’s Office is now playing a big role in this effort.”

“Prescription medication abuse continues to be a significant threat to local communities,” said DEA Special Agent in Charge Javier Peña. “The DEA supports the Harris County Sheriff’s Office’s efforts to assist the public in disposing of prescription medication in a secure and environmentally friendly manner.”

According to the 2009 National Survey on Drug Use and Health, every day about 2,500 teens use prescription drugs to get high for the first time; 16 percent of the teens who abuse pain relievers did so before the age of 15. Of those surveyed, 62 percent believe that teens got their prescription medications from the family medicine cabinet.

“This permanent drop-off box is a new tool that will help eradicate substance abuse in our community,” Ray Andrews, director for the Houston Crackdown Office of the Mayor, said. “With the advent of this permanent drop box, citizens will dispose of their medications properly.”

Unfortunately, keeping expired or unused medication also endangers citizens whose intentions are not abusing the medication. “Some senior citizens tend to take medications without checking for expiration dates,” Major Edwin Davis of the HCSO’s Community Support Bureau said. “This permanent drop-off location is going to be instrumental to our cause of keeping all citizens of the Harris County area safe. I hope the program will extend to establish other permanent drop-off locations so that it will be easy for all citizens to be safe.”

Candidates speak out at Chamber Forum 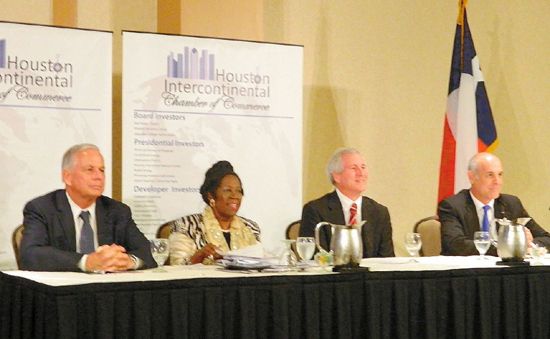 NORTHEAST – With the election only a few weeks away, candidates and incumbents met with the public and members of the Houston Intercontinental Chamber last Tuesday, Sept. 18 to present their accomplishments and their goals for a new term.

Green spoke about his roots to the area, and serving on two important commitees in Congress, Energy and Healthcare. He is running with no opposition.

Candidate Jim Dougherty, a Democrat, is running to represent District 2 in Congress, a position now held by Ted Poe. He pointed out how the district boundaries have been “gerrymandered” this year, stretching from Aldine to the East. An attorney and CPA, he said he supports Obama in most of his policies, wants to invest more in education, and realign the tax code.

Candidate Sean Seibert, a Republican, is running for a seat from the 18th district against Jackson-Lee. He reviewed his career as an Army Lieutenant Colonel, serving in Afghanistan and elsewhere. He says he is a fiscal conservative, wants fiscal responsibility and debt reduction, and strong border security and national defense.

Debbie Riddle spoke of her recent trip to Iraq and championing womens’ rights there. She spoke about being “blessed to live in Texas.”

State Representative Senfronia Thompson holds an important position as chair of the Local Calendar committee in the Texas Legislature. She said 90% of House bills must go through her committee, for action or approval. Some important issues are financing of public schools, human trafficking in its various manifestations, a new protective order against family violence. She said the state will have a surplus, perhaps $3-4 billion to allocate in the next session in 2013, an important opportunity.