Senator Gallegos passes away at 62 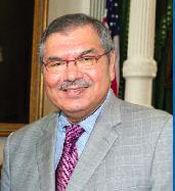 The Senator’s family is enormously grateful for the outpouring of support, thoughts, and prayers expressed during the last few days.

Senator Gallegos was pre-deceased by his father, Mario Gallegos, Sr.

Details on services for the Senator are pending; they will be announced when finalized. It is the intention of the Gallegos family to hold funeral services in Houston, and a memorial service in Austin. The Senator will be buried in Houston.

A lifelong Houstonian, Mario V. Gallegos, Jr., has dedicated his career to helping others. After serving 22 years in the Houston Fire Department where he retired as Senior Captain, Gallegos continued his public service in the Texas Legislature. Elected to the Texas State Senate in 1994, he is the first Hispanic Senator elected to represent Harris County. Prior to his election to the Senate, he served two terms in the Texas House of Representatives.

Senator Mario Gallegos has been a champion of continued growth and prosperity for the people of Senate District 6. During his decade of service both in the House and Senate, he has sponsored and passed legislation creating economic opportunities for communities that have long been passed over for development. He has passed legislation creating municipal management districts that have revitalized communities and serve as a model for other Texas cities.

Known as one of fire safety and law enforcement’s “best friends”, he has received numerous awards for passage of legislation benefitting members of our firefighting and policing communities. Most recently he was recognized by the Texas State Association of Fire Fighters and the Combined Law Enforcement Association of Texas for his work during the 77th Legislative Session.

Senator Gallegos is also one of the biggest champions for senior citizen and education issues. From ensuring Medicaid funds for personal needs of residents in long-term care facilities to fighting for teacher pay raises and higher education funding, he continues to serve as an influential voice in Austin for his constituents back home.

A graduate of the University of Houston, he serves as one of his alma maters strongest voices in Austin. The University of Houston System continues to attract a growing number of students, and maintains its position as one of the premiere university systems in the state. Senator Gallegos continues to work toward ensuring that the current levels of university funding for the Houston area increase to meet the growing demands of Senate District 6.

He has received numerous awards in appreciation for his work during his legislative tenure including: Texas Municipal League’s “Distinguished Legislative Service Award”, Sierra Club’s Legislative Service Award, Texas Women’s Political Caucus Good Guy Award, Legislator of the Year by the Mexican American Bar Association of Texas and the Fiestas Patrias Distinguished Hispanic of the Year Award. Senator Gallegos continues to be active in many local, state and national organizations and is constantly working with them to help further their goals.

East Aldine residents have been without heavy trash pick-up service for about six months, when Harris County Pct. 2 took over much of the territory that was previously in Pct. 1.

Because Pct. 2 was new to this area, they did not have any money in their budget, and therefore had to suspend this important collection service.

The East Aldine District has been meeting with Pct. 2 to find a solution to this problem. Now an agreement has been reached, and in the near future the curbside pickup of heavy trash will resume, according to Richard Cantu of the District.

At their last board meeting, East Aldine District voted to pay approximately $135,000 for the landfill fees. This figure was an estimate, based on previous costs that Pct. 1 had incurred.

In an exclusive interview with the Northeast News, Pct. 2 commisioner Jack Morman thanked the district for their participation, and said he will look for additional funds in the future for the County to assume more of the costs.

Expected to open in the spring of 2013, the school will be located at a newly-constructed facility adjacent to the CHI manufacturing plant in North Houston. The new school will transform one of the college’s longest-running programs into Houston’s premiere destination for cosmetology training.

“Our initial agreement with Farouk Systems was the first of its kind and placed us on the leading edge of community college partnerships. With this expansion of our relationship, we can provide students with unmatched resources and unique insight in a highly-competitive and growing industry,” said Dr. Steve Head, president of LSC-North Harris.

In 2010, the college partnered with Farouk Systems to provide professional development for instructors, as well as access to safer, more advanced CHI products for students, and expanded career opportunities for its graduates.

“Education is the foundation for success and innovation. This partnership with Lone Star College-North Harris fulfills my dream to give young beauty industry professionals the tools to build not only a career, but a business. We hope this CHI School will be the first of many,” said Farouk Shami, founder and chairman of Farouk Systems.

The new venture will capitalize on the world-renowned products and methods of Farouk Systems, along with the college expertise in education and training. Graduates will be prepared to work in the most sought-after industry positions, and have an invaluable understanding of both client service and the manufacturing process.

“Student success, innovation and partnerships are fundamental to the vision for Lone Star College System,” added Dr. Richard Carpenter, LSCS chancellor. “Our work with Farouk Systems has proven to advance our goals in each of those areas, and I expect this new initiative to continue that trend.”

The new school will have a strong emphasis on student career placement assistance, drawing on Farouk Systems’ large network of affiliated salons and industry contacts, and will feature a dedicated career placement advisor. Under the agreement, LSC-North Harris and Farouk Systems will also combine to provide $140,000 in scholarship funds for cosmetology students.

“We expect approximately 35 students in the inaugural cosmetology class, with a total capacity for more than 100 students in the program each year.” explained Dr. Head. “In addition, we plan to offer training in related fields such as nails, lashes and massage therapy.

The ground breaking for the new CHI Lone Star College-North Harris School of Cosmetology will take place at the CHI manufacturing facility located at 880 East Richey Road in Houston on Tuesday, Oct. 30 at 3 p.m.

Prospective students can request additional information by calling 281.618.1169, or by visiting LoneStar.edu/CHIschool to begin the application process.