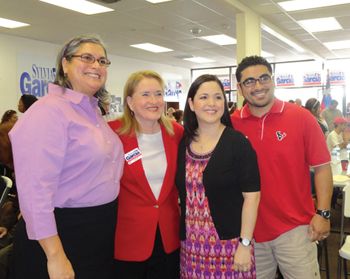 Houston, TX – Senate District 6 candidate Sylvia Garcia opened her headquarters last Saturday, December 1st. to a crowd of hundreds, with overflow spilling out on to the sidewalk. After thanking her supporters and residents of Senate District 6 for coming out on a Saturday morning she immediately focused on the election date, and asked everyone to demand Governor Perry call this election. The voters of Harris County deserve representation in Austin starting the first day of the legislature. “This is a simple taxation without representation issue,” Garcia said. “The working families of our district, most of whom are Latino and African American, deserve to have their voices heard in Austin without delay.”

Representatives Farrar, Hernandez-Luna and Walle said they need a fighter like Sylvia Garcia with them at the Capitol. “Public education has been cut by 5.4 billion dollars. I want my son to have the opportunities I did not have and that will not happen without a strong leader to take on Governor Perry’s attack on public education,” said Representative Walle.

Representative Hernandez- Luna said the only way to stop Governor Perry‘s opposition to President Obama’s health care law, is to have Sylvia Garcia on the floor of the Texas Senate. With members of labor, TOP and residents from all over the district crowded into the head quarters, Luna reminded everyone that up to 400,000 Harris County residents could be denied health insurance.

After the speeches ended with the crowd chanting, Fired-up and Ready to go, teams of volunteers hit the streets to knock on doors and talk to the voters of District 6.