NORTHEAST NEWS COACH OF THE YEAR: Patience pays off for Nimitz program, coach 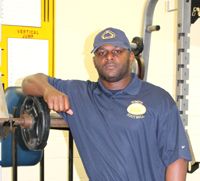 When Robert Toomer graduated from LSU in 1995, he had a decision to make. Would he continue his football career in the Canadian Football League (CFL), or enter the coaching profession.

Toomer had a young family at the time and although he still had a passion to play the game, he knew it was in his and his family’s best interest to put up the pads and grab a whistle.

The program struggled the first couple of years, but in his third season he led the Cougars to a late run that produced a playoff berth. He followed that up with a 7-3 season in 2012 and a second straight trip to the playoffs thanks to a three-game winning streak to close out the season.

For the first time in almost a decade, Nimitz defeated all three Aldine ISD teams en route to their second straight post-season berth under Toomer’s direction.

For that effort, Toomer was named the Northeast News’ Coach of the Year.

“We knew we had a lot of talent when we got here,” Toomer said. “I had a four-year plan in place and asked that they evaluate me after those four years. I want to thank Mr. (Alex) Jordan (Nimitz High principal), Dr. (Crystal) Watson-Barrow (Nimitz Ninth Grade principal) and Richard Delgado (Aldine ISD director of athletics) for having faith in us in turning the program around.”

Toomer admitted the first couple of seasons were tough, but he and his staff stuck to their plan and now believe they are headed in the right direction.

“We started a lot of young guys those first couple of years and we struggled, but we stayed true to our plan. We think we have the program moving in the right direction. We were excited to be 7-3 this year. Our kids played with passion. We’ve been consistent and we understand what we have in our kids. These kids have been a blessing to coach.”

This season, Toomer had the chance to coach his own son, senior fullback Trey Toomer. He said it was special to coach his son, but he also knew his son had to earn his time on the field.

The younger Toomer did just that as he rushed for 607 yards and scored 13 touchdowns.

“It was a joy to coach Trey,” Toomer said. “He had to make some adjustments and he did a good job with that. It’s exciting to see your own son do well on the field. It was a blessing. I enjoyed every minute of it. It sure made Senior Night a little more special for his mom and me. Trey really grew up this year and I’m so proud of him.”

He added coaching ones son is rewarding, but it can also be difficult.

“You can’t show any favoritism when coaching your own son,” Toomer said. “I just wanted him to be a teenager. He had to prove himself to get on the field and he did.”

The elder Toomer knows a thing or two about running the football. He was an accomplished high school player at Sylvester, GA. So accomplished in fact that he broke Herschel Walker’s career rushing record in the State of Georgia by rushing for more than 8,000 yards while scoring 105 touchdowns. Toomer’s record has since been broken. Not only did Toomer leave his name in the Georgia record books, he also made a splash nationally and is still second all-time in the number of carries nationally with 1,200.

His stellar high school career earned him a scholarship to LSU where he enjoyed success early, but a torn PCL forced him to the bench and opened the doors for Kevin Faulk to take his place. Faulk went on to have a long and successful career with the New England Patriots, winning three Super Bowl titles as a member of the Patriots.

“I really enjoyed my time at LSU. When I got hurt and Kevin came in, I had to learn to deal with adversity. I realized at LSU that I wanted to be a coach. I had a chance to play in the CFL, but I decided to finish my degree and began serving as a student coach.”

Looking back, Toomer knows he made the right career decision and is looking for bigger and better things for the program, and all sports at Nimitz.

“Overall, I think the program is headed in the right direction, not just on the field but in the classroom as well,” Toomer said. “We don’t want our kids to play just one sport, we want them involved in as many sports as they can handle, boys and girls. We want all of our sports to be successful.”

Looking back at it, that torn PCL may have been a blessing in disguise for Robert Toomer. It set him on the coaching path and that’s been a good thing for him and the Nimitz Cougars. 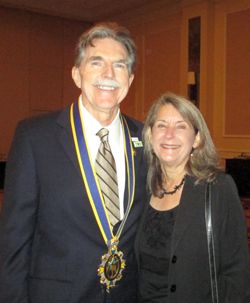 GREENSPOINT – A surprise visit by former Houston Mayor Kathy Whitmire was one of several highlights of the Greenspoint District’s recent reception honoring its 2012 partners and volunteers, and acknowledging the career and pending retirement of District President Jack Drake.

The evening opened with recognition of the Greenspoint District’s key partners and volunteers for 2012. Four awards were presented:

Digital Realty Trust was named Greenspoint’s 2012 Company of the Year for its continued investment in the area. Owner of the Greenspoint Data Park at I-45 North and the Sam Houston Parkway, Digital Realty Trust is in the midst of a two-phase redevelopment including construction of two purpose-built high-efficiency, high-performance computing data centers totaling nearly 138,000 square feet.

Greenspoint Volunteer of the Year was James Curry of Hines. Chairman of the Greenspoint District Board of Directors, Curry was recognized for his dedication to the district, demonstrated in the time and expertise he freely gives toward representing Greenspoint.

The Greenspoint Property Owners Association earned Partner of the Year honors for its development of a public plaza to showcase a signature piece of public art commissioned by the Greenspoint Redevelopment Authority. Titled “Paper Plane,” and due to be installed in early 2013, the sculpture is an origami-style plane rising 15 feet above the ground.

Mexico City Attorney Manuel Moctezuma of Chalela, Enriquez y Moctezuma, S.C. was named International Partner of the Year. Moctezuma is a member of the Greenspoint District International Economic Development Advisory Council, and he travels regularly from Mexico City for Advisory Council meetings. In 2012, he was instrumental in helping organize a Greenspoint trade mission to Mexico, and he provided introductions to attorneys in other countries who assisted in other district trade missions.

Following the awards, several speakers, starting with Whitmire, acknowledged retiring President Drake for his contributions to the community. Before taking on the assignment of gathering support to create the Greenspoint District, Drake served as assistant to Mayor Whitmire, Houston’s mayor from 1982-1992. Drake recruited department heads and managed Whitmire’s support staff for the first four years of her administration.

A City of Houston proclamation, presented on behalf of Mayor Annise Parker by District B Council Member Jerry Davis.

A State of Texas proclamation, presented on behalf of Rep. Armando Walle by Sylvia Garcia.

A US Congressional proclamation, presented on behalf of Congressman Gene Green by George Maldonado.

Another highlight of the evening was the ceremonial transition of leadership of the district from Drake to Jerry Lowry, who the Board recently named as Drake’s replacement. A 13-year employee of the Greenspoint District, Lowry is currently executive vice president and chief operating officer. He will officially become president when Drake departs January 15, 2013.

Earlier in the day, at a meeting of the district’s Board of Directors, service awards were presented to four board members. Recognized for five years of service to the board was Dr. Wei Huang of American Bureau of Shipping. Earning recognition for having completed one year of service to the board were Grace Cervin of AGS Professional Services, Ed Hinton of High Mount Exploration & Production and Dave Egbert of Exterran Energy Solutions.