Lessons on Humanity from a Cheetah 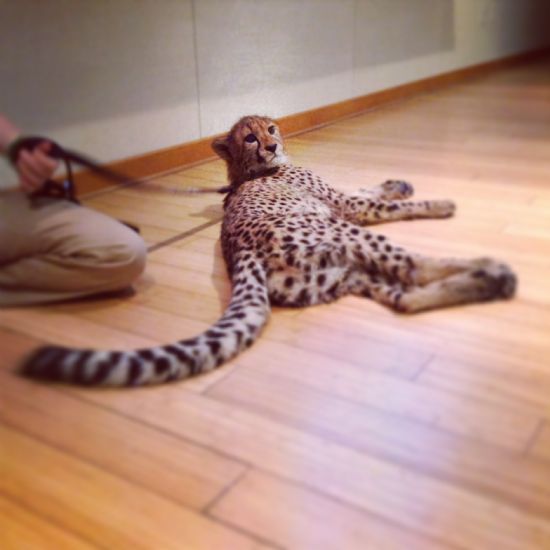 With the spots of a Dalmatian, the build of a Greyhound, and the paws of a Great Dane, Savanna is clumsily put together but unbelievably cute. Shes also entirely feline  a cheetah cub, about 7 months old and 38 pounds. (Full grown, she could weigh double that.) I met her at the zoo, but not with bars or glass or a moat between us. No, she stood less than an arms length away at times, restrained by a simple leash.

This happened at an event for Andys work, hosted at the Cincinnati Zoo. As part of their Ambassador program, Savanna has been acclimated to a variety of human sights and sounds so that she can attend functions such as our party that night, or more importantly classrooms, to help teach people about wildlife studies and conservation efforts. Savanna stayed with us for nearly an hour, during which time she calmly sat for pictures, climbed on a table to monitor the room, and even nuzzled her 3 handlers like a house cat. With such affectionate gestures, and some of her baby fuzz still visible, it was easy to forget Savannas true nature.

Despite her training, Savanna is still a wild animal, ruled mostly by instinct. She was one of two cubs born to the zoo, but her brother didnt survive. Apparently cheetah mothers wont raise just one cub, because after 18 months cubs are left to fend for themselves, which would be hard to do on their own without siblings. Thus Savannas mother abandoned her, and Savanna became an orphan.

Thats when the zoo stepped in. They hand-raised her, secured her a spot in the Ambassador program, and even partnered her with a puppy of similar age and size to be an adoptive playmate and brother. The two will be best friends until she matures, at which point instinct will kick in again, because female cheetahs live alone. Fortunately one of the handlers is already eager to adopt the black lab, Max, when Savanna outgrows him.

The push and pull between the laws of nature and the intervention of mankind has defined Savannas life, and in some ways it defines ours too. Do we let things occur as they may, or should we step in and control when we can? Thats what I kept thinking about later that night, long after Savanna had left our party. Its a pretty philosophical takeaway from a mere hour with a cheetah cub, but then, hanging out with Savanna was a once-in-a-lifetime experience, one that I both enjoyed and was affected by.

And that, to me, is the mark of a great ambassador.

BOARD VOTES TO FUND 58 STREETLIGHTS, PROGRAMS

NORTHEAST – The East Aldine District at their monthly board meeting last Tuesday night voted to seek legislative approval for annexation of an additional 790 acres to the boundaries of the district.

The district also took action on a number of other action items on their agenda, including voting for additional new streetlights, and programs for agencies within their jurisdiction or area of service.

The areas proposed for annexation would not pay any additional taxes, according to East Aldine District president David Hawes, because the district is supported by a 1 cent sales tax. Residents already pay this when they purchase items, and would not incur any additional expenses. However, money spent in the four new areas would now be paid to the East Aldine District, instead of other government entities. In return, residents would get the benefit of district services such as heavy trash pick-up, streetlights, sidewalks, water and sewer service, public safety patrols, and other quality of life services provided to residents of the district.

The four areas to be added, if approved by the legislature, include two tracts north of Aldine-Bender Road, along Fountain View and Vickery Road, including Haverstock Hills apartments; a large tract between Lee Road and the Southern Pacific Railroad line at Homestead, including Pine Village; and a tract at the southern edge of the district known as Halls Park, which will be developed as a new park by the Harris County flood control district. Halls Bayou runs through this property, which is on the east side of US59, near the Sak-N-Sav store. This latter area is now part of the Greater North Houston Management District, that has agreed to cede the land so that it can be developed properly.

The District considered and approved a number of other agenda items.

The district is planning to work with local restaurants to promote healthier food choices. Through the display of the program logo on menus, tables, windows, and other marketing materials, restaurants will participate and help encourage a better, healthier lifestyle.

The district is working on an agreement with Sunbelt Water District, to jointly operate a Neighborhood Depository & Recycling Center, for the benefit of all residents of the district. The location of the center will be adjacent to an existing Sunbelt plant at Hopper and Halls Bayou area.

The district is also working with Precinct 2 Harris County to re-establish the Heavy Trash Pick-up program that was successfully run by Pct. 1. Details, locations and dates will be announced at a future time this spring, according to Richard Cantu of East Aldine District.

The district also approved a number of Economic Development initiatives to bring businesses and jobs to the area.