NORTH FOREST – In its latest plan to avoid the order from the Texas Education Agency to close and merge with Houston ISD, leaders of the opposition to closure, including Congresswoman Sheila Jackson Lee, have put forth a plan to turn the district over to a consortium of 3 well known Houston area Charter schools who would run the district and be responsible for financial decisions, personnel and education achievements.

The plan was announced on Friday at a news conference held at Shadydale Elementary school, with students present as well as many leaders of the North Forest community.

Also present for a ceremonial signing of an agreement were representatives of the three charter schools, the school board president Pastor Charles Taylor, the North Forest Superintendent Edna Forté, parents’ representative Ernestine Jones, former U. S. Education Secretary Rod Paige, and Attorney Chris Tritico. Paige indicated that he would be a member of a management team, representing the three charter schools, that would take over running the district. Paige is also a KIPP board member, and a former superintendent of Houston ISD.

Paige was quoted as saying he thinks the “project has national significance,” and could set an example for other distressed and underperforming districts throughout the nation.

This is not the first time that a charter school has been asked to help a failing district. In fact, North Forest partnered with YES Pres three years ago, and has a successful middle and senior high school operating in one of their buildings. YES is a supplement to North Forest, however, not a manager. KIPP also has a presence in the area, with separate schools for boys and girls on Mesa Drive.

The three charter schools that have agreed to form a coalition to run North Forest are KIPP, Harmony, and YES Prep charter schools. KIPP co-founder Mike Feinberg was quoted as saying “we recognize how difficult this work is” but that “If we didn’t believe we could do it, we wouldn’t be trying.”

Attorney Tritico indicated that a letter had been sent to TEA Commissioner Michael Williams, outlining the plan but not the details. Williams issued a statement saying he was waiting for details, to evaluate whether the plan “will in fact meet the needs of all students in the NFISD.”

In the meantime, the order to close and merge North Forest with HISD still stands, and both TEA and HISD have indicated they are proceeding with the merger plans, which are to take effect after the end of the school year on June 30th.

Critics of the district continue to urge merger, including the Houston Chronicle, in an editorial last month saying North Forest has had too many opportunities without success, and it was past time to offer the students a better education.

CONGRESSWOMAN SHEILA JACKSON LEE held a press conference on Friday, in a classroom at North Forest’s Shadydale Elementary, to announce the arrangement with the 3 Charter Schools, and to sign a symbolic agreement. 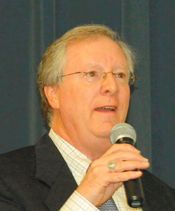 In a presentation to the North Channel Chamber last week, McCord Development’s Land Development Director, Rick Yarbrough, described the fea tures of the new 4000 acre “Enterprise Park” that is being built on Beltway 8 East, near the current Summerwood neighborhood. McCord’s CEO Rick McCord, has spent the last 20 years assembling the land and planning this project.

The concept is to build a top level business park for top corporations that will feature energy efficiency, in the buildings, land development, and design amenities.

McCord and many other city planning officials believe that there is great potential for development in the Northeast sector of the county, and that this project could be the prototype for community planning and economic development.

The project will be a beautifully landscaped “mixed use” with offices, commercial, industrial, research, and multi-family buildings in segregated zones.

Yarbrough cited the location as being ideal, with easy access to the airport to the north, and the Port of Houston to the south. In addition, it is surrounded by quality housing, parks, good schools, and water features including Lake Houston.

McCord is just beginning the development of this property, Yarbrough said, and they expect it to be a 20 year long project until completed.

Ryan McCord, president of the company, said “it’s important for companies to have state-of-the-art facilities to attract and retain the best and brightest talent.”