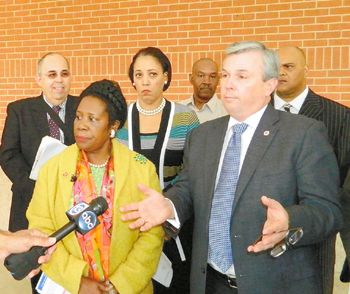 NORTH FOREST – Representatives of the North Forest school district have continued last week at an Austin meeting with TEA, their fight to keep the district open, in spite of an order from the Texas Education Agency to merge with the Houston ISD after June 30 of this year.

Led by their well known Houston attorney, Chris Tritico, and with the encouragement and help of Congresswoman Sheila Jackson Lee, the district has taken two approaches to thwart the closure order.

First, they have received the support of 3 local charter schools, KIPP, YES Prep, and Harmony, to form a management group that would run the district in lieu of the present administration.

Second, they have asked TEA Commissioner Michael Williams to set aside the closure order, claiming it was biased by the fact that the TEA official in charge of the decision, Lizzette Reynolds, was not impartial and did not have standing to rule on the decision.

Tritico and a North Forest delegation including superintendent Edna Forté and James Troutman met in Austin last Friday with TEA officials for over 4 hours, arguing that the district has made substantial progress to improve their academic and financial ratings. They are operating on a one year reprieve from TEA, but in that year they are required to meet certain stated criteria for graduation rates, financial stability, and test scores. TEA claims they have not met the requirements, and North Forest says they have met all 10 requirements, if recent data is taken into account. Some of the disagreement centers on the time period used for the evaluation of the district.

Prior to Friday’s meeting, the district through its attorney had requested from TEA a new appeal hearing, based on the fact that the official conducting the hearing, Deputy TEA Commissioner Lizzette Reynolds, was not impartial due to the fact that she was involved in earlier procedural meetings regarding the district.

Tritico has indicated that if they fail to get a new appeal hearing, or if their meeting Friday fails to result in a favorable ruling as to the closure order, then his next step would be to file a lawsuit and have the courts decide the matter.

These decisions to not deal with the other proposal, for the three charter schools to take over the management of the district. This would be the basis of a separate ruling, it can be assumed. TEA Commissioner Williams has stated that he has not had time to review this proposal, but that he currently expects both NF ISD and Houston ISD to proceed on the basis that they will merge on July 1st.

TEA says the main problem in North Forest is accountability at the high school. They want students to attend HISD schools, namely Kashmere and Wheatley, but which have better test scores at the 10th and 11th grad levels. But North Forest argues that their 9th grade score are better than HISD, and indicate district-wide improvement.

TEA has indicated they will issue a final decision by April 1st, but it seems that this maynot be the final word on the controversy.