NORTH HOUSTON – The burgeoning economy for development in North Houston is being examined in a series of panels and luncheons by the Houston Intercontinental Chamber, according to its president, Reggie Gray.

The first of these presentations was last Thursday, at a chamber luncheon at the Sheraton JFK Hotel. Two developers and a representative of Lone Star College North Harris presented details of their plans to invest in large projects in North Houston.

A large audience of business principals and chamber members listened with interest, since many of them are also involved in similar projects in the area.

According to Johanna Boley, Lone Star College must invest a total of $497.7 million in new facilities, just to meet the needs of approximately 30,000 students that have enrolled since the last bond referendum in 2008. Boley explained that the money would be used to build new instructional space on all six LSC campuses, and of special interest in North Houston is a new campus in Aldine on a 61 acre site on Aldine Mail Route that would include an 85,000 sf building and 650 parking spaces. Development on this site would include other partners, to form a town center urban environment. Others that have expressed an interest are Harris County Sheriff’s office, East Aldine District, YMCA, and other institutions.

Boley said that due to increases in assessed valuation of properties within the LSC service area, no increase in the tax rate would be required to pay for the bonds.

Upon completion of the bond construction, Lone Star College will have a total of 90,000 students enrolled in credit, non-credit and continuing education classes, making this the largest institution of higher education in the Houston area.

Ryan McCord, president of McCord Development, presented updated information on a very large, 4000 acre mixed-use master planned corporate development project that his company owns and is developing along Beltway 8 East/Sam Houston Parkway. This project has a long term prospect of materially changing the nature of living and working in Northeast Houston. Generation Park will accommodate small and large corporate headquarters, offices, manufacturing, and warehousing for a variety of business types, McCord said. The size of the project indicates it will take up to 20 years to fully develop, but 650 acres are ready for building currently.

The site is located on either side of Beltway 8 East, near the Summerwood community. McCord points out it is only 10 miles to the IAH airport, and 10 miles to the Port of Houston, an ideal industrial location. It has rail and highway connectivity. The master plan includes lakes, trails, landscaping, and ESE Energy efficient features.

Jay Kraft and Hans Brindley represented the local branch of a one of the nation’s largest real estate development firms. They are active in building corporate facilities in the Greenspoint and greater Houston area. They presented details of some of their construction projects.

The Chamber will continue their Developing North Houston programs in June, with the North Houston Economic Development Council presentation. 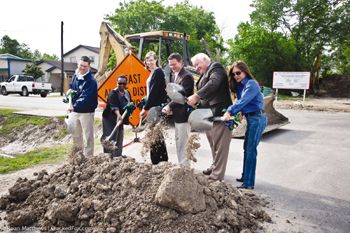 Groundbreaking on Phase Two of the Mary Eleanor/Mary Francis Sewer Project took place on Thursday, April 25, continuing an extensive water and sewer project that will benefit 200 residents of East Aldine.

Dignitaries including Commissioner Jack Morman, Precinct 2, members of the East Aldine Board of Directors, staff from the offices of Rep. Armando Walle Office and Senator Sylvia Garcia Office, and the Board Directors of Sunbelt Fresh Water Supply District were on hand for the groundbreaking. Officials from Harris County Community Services and the Public Infrastructure Department, as well as the construction contractor Reliance Construction, were also on hand. The groundbreaking took place at the corner of Bertrand and Rechelle.

Funding came from a $1.19 million U.S. Department of Housing and Urban Development grant, and the balance came from the East Aldine Management District in the form of leveraging funds.

The new lift station and sanitary sewer collection system will alleviate health issues arising from the septic tank systems currently used to manage waste in the community that have contributed to higher bacteria counts in Halls Bayou, as monitored by the Houston-Galveston Area Council.

“The Number One priority is public health. This project takes away the issue of failing septic systems that have been a threat to children who play nearby,” said Scott Bean, director of infrastructure for the East Aldine Management District. “It’s also a big plus for homeowners in the District and for water quality downstream.” Phase One of the project, serving 50 homes, began in June.