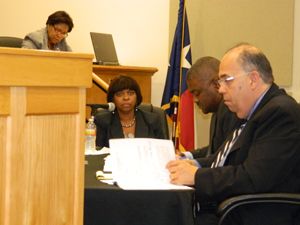 At a special called board meeting last Monday night, trustees of the North Forest school district were supposed to pass eight resolutions to end the employment of teachers and staff, and to begin the process of shutting down the district and merging with the Houston ISD, at the orders of the Texas Education Agency.

Instead, the board defied the TEA instructions, and voted NO on two resolutions, and let the others die for lack of a second.

Present in the meeting room were several hundred citizens who stood and applauded after each negative vote, chanting “Don’t do it. Stand up to them.”. Also present were NFISD lawyers, and several representatives from the TEA.

After each of the eight resolutions died, TEA state conservator Doris Delaney read a statement that said their vote was not effective, and that she had the legal authority to override the No motions and pass the resolutions.

After the voting was complete, board president Charles Taylor Sr. made a statement to the public, saying that the board had only voted No because that was the will of the community and they were only following the wishes of those who had voted them onto the board.

The next step in the closure process is supposed to be letters to the dismissed teachers and staff, sent by May 6, notifying them of the action. However, a question remains whether the NFISD will actually send these letters, as directed by TEA. If they refuse, it is possible TEA could bring legal action.

Later in the week, a spokesperson for the TEA, Debby Ratcliffe, indicated that questions remain about the legal authority of the TEA to terminate contracts, but she indicated that this was an important step so that if the district is merged with the Houston ISD, they will not have the responsibility to pay for unfulfilled terms.

HISD has said that they plan on holding a job fair, to fill all positions when they take over the district. This would include any or all dismissed North Forest employees and teachers.

However, in addition to the community wishes, the North Forest teachers’ union also objects to the possible firings, according to its president Betty Robinson, and they will be filing legal appeals on behalf of any terminated employees. This action would add to the time required to resolve the matter, apparently. Under state law, any teachers that are dismissed may have the right to appeal and get their job back. It is unclear if this would require HISD to rehire them.

In the meantime, several avenues of relief from the closure are being pursued. One, district lawyers have filed an appeal with courts in Austin. Also, Congresswoman Sheila Jackson Lee has led a vocal resistance, and asked for help from the federal government. Finally, the community continues to hold rallies and marches to focus attention on their plight.