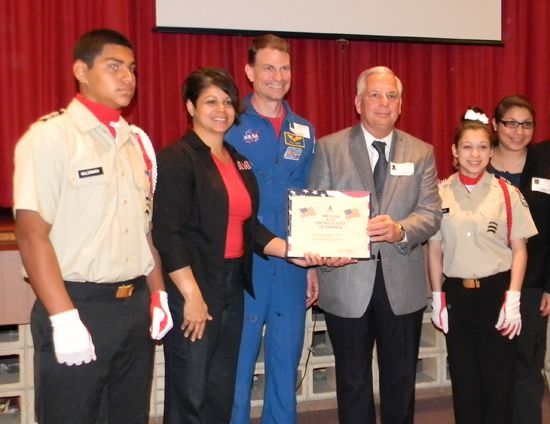 A special guest, NASA Astronaut Dr. Stanley Love, landed at Aldine ISD-Hambrick Middle School last Friday,May 10 along with Congressman Gene Green to speak to students about the importance of math, science and graduating from high school.

With a 19 minutes video, from his first spaceflight in 2008 on the crew of STS-122, Dr. Love showed and explained students the process of a spaceflight. “The first thing we need to do in space is get to work,” said Dr. Love. “Taking out of our chairs and taking photographs with a sensor pole of the external tank (because a few years ago during Columbia spaceflight a piece of foam insulation felt off the tank and destroy the shuttle when they entered the atmosphere), so we’re taking pictures of the tank making sure no piece of foam felt off it, he added.

Dr. Love explained that their destination was the international space station which is flighting around the earth 200 miles up and 170,000 miles per hour in space and the shuttle needs to catch up with it very slowly to not cause a collision. Their mission was to get supplies to the space station crew and get one of its members back to earth.

Sounds a simple task but this implies high technology that only Astronauts can managed. And kids who may study science and math could be the future astronauts. “You can be everything you want,” Dr. Love told students. Science and math are the most important for technology.

Rep. Green said, “Sometimes the road to careers like being an astronaut can seem out of reach when a student is young. For over ten years, I have been bringing NASA astronauts to local middle schools every year to show students that they can achieve anything if they work at it.”

NORTHEAST – In spite of endorsements by many leaders organizations and publications, the $497.7 million bond referendum for expanded facilities for the six campuses of Lone Star College System was defeated in Saturday’s election. The bond proceeds were to be used for one million square feet of new buildings, and related improvements.

Unofficial results late Saturday night indicated that the bonds were defeated by a margin of 44.4% FOR, and 55.6% AGAINST the proposition. However, in Harris County the vote was slightly in favor of the proposition, 53.2% FOR, 46.8% AGAINST. In Montgomery County, where the Tea Party Republicans had mounted a concerted effort against the bonds, there were 28.7% FOR, and 71.3% AGAINST. A total of over 18,700 voters went to the polls, and even though 12,033 were in Harris County and 6,738 in Montgomery County, nevertheless the totals amounted to defeat. A few San Jacinto County votes have not been reported but are not expected to change the outcome.

In the Trustee elections, the three candidates endorsed by the Montgomery County TexasPatriotsPAC were elected. These are David Holsey, Kyle Scott, and Ron Trowbridge. As a result, two incumbents Tom Forestier and Randy Bates were defeated. Bates was chairman of the Lone Star board that recommended the bond package.

Ironically, much of the bond money was to be spent for Montgomery County facilities, which will now not happen.

Also in question is how the increased growth in student population, estimated to reach 110,000 students by 2018 will be housed.

Opposition to the bonds was led by a Tea Party group, calling themselves TexasPatriotsPAC, with Julie Turner as the president. Their objections included doubts about the enrollment projections as accurate, and whether Lone Star already had too much space. They discribed a scenario where enrollments might decline in the future, based on economic conditions, reduction in federal tuition grants, and changes in the methods and locations of teaching.

They also felt the promise not to raise taxes to pay for the facilities might be changed in the future, citing a possible decrease in funds available from the federal and state governments.

They pointed out that even though Lone Star System promised “no new tax increase” to pay for the bonds, nevertheless increases in property valuations in the future would mean homeowners would be paying more.

In their words, “…if this bond referendum is approved, the debt is put in place, the enrollment does not grow as the College forecasts and Texas continues to reduce its financial support for the school, our taxes rates (sic) will be increased to pay for the bond unless property values increase so much the rate increase is unnecessary. In either case, we will be paying higher taxes to LSC for this scenario.”

One of the new trustees, former LSC professor Ron Trowbridge, was quoted as saying the election defeat heralded a new era at the college, and the goal will be for the administration “to be more accountable, financially responsible and humane to the faculty,” a reference to some employment issues over the last few years.

At presstime, officials at the Lone Star System had not commented on the defeat, but it is expected that they will now have to formulate alternative plans to meet the needs of the growing student population, and the requests from at least some of their service area for more programs, classes, and services.