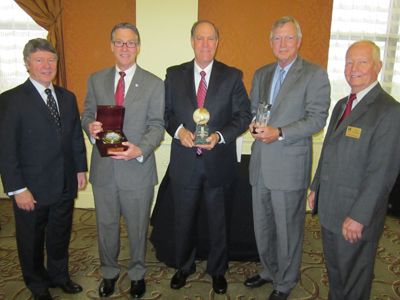 HOUSTON (May 16, 2013)– North Houston Association (NHA) had its Annual Awards Luncheon on Wednesday, May 15, 2013. Harris County Judge Ed Emmett was the keynote speaker. The following awards were presented by Vice Chairman Mark Froehlich, Brown and Gay Engineers, during the luncheon:

Michael G. Page, Schwartz, Page & Harding, LLP was presented with the North Star Award. Mr. Page is being honored for his many monumental contributions to the successful growth and development of The Woodlands area. The North Star Award is presented to an individual in north Houston who has made a long-term, significant contribution to the region.

City of Houston Council Member Stephen Costello, President of Costello, Inc. and longtime member of the NHA, was presented the Compass Award. Council Member Costello received this award for his outstanding leadership role on the Rebuild Houston initiative. This award is bestowed on an individual who is a member of the North Houston Association, and has made a significant contribution to the area and to the programs and projects of the Association.