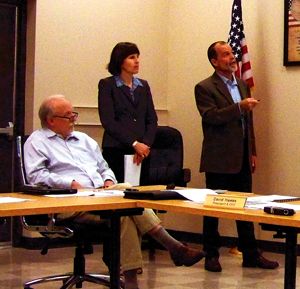 EAST ALDINE – At the regular board meeting last Tuesday, May 21, the board reviewed six schemes for the development of their 61 acre site on Aldine Mail Route, nominally termed the “Town Center.”

The schemes each had a different theme and overall planning concept. They were termed as follows:

1. Formal Pond, featuring a ring road and buildings around a central lake

2. Civic Center, with only half the site developed tightly around a quadrangle

3. Queens Park, landscaped buildings in a crescent motif around a central oval green

5. Lake Island, buildings around a heavily featured lake with bridges and an island

6. Park Road, a meandering lake with buildings along the edges, a town green near Aldine Mail Route, and small shops facing the street.

The last scheme was favored by the board, partially because it had been updated from comments made by the Facilities Committee and incorporated several improvements from other schemes.

However, it was acknowledged that the plan was only an early working document, subject to much revision be all the interested parties that are participating in the development, including the public.

In addition, the site plan shows 40,000 sf of supporting retail shops, a recreation facility/nature center/field trip building of 15,000 sf, civic outdoor spaces, a possible community or Civic center of 25,000 sf, and other offices for the Sheriff’s investigation units of 20,000 sf.

Each of the six schemes avoided building on a flood plain area in the southwest corner of the site, but had pedestrian access to the Keith Wiess Park immediately to the south of the East Aldine site.

Each of the schemes has the Lone Star College – NH building in the northwest corner, near the street and adjacent to Stewart Elementary. Due to the failure of the bond issue, construction date of this building would be farther in the future, Hawes said.

In keeping with the idea of developing a high quality design, David Hawes suggested that the site become an Urban Land Institute study project for further ideas and designs.