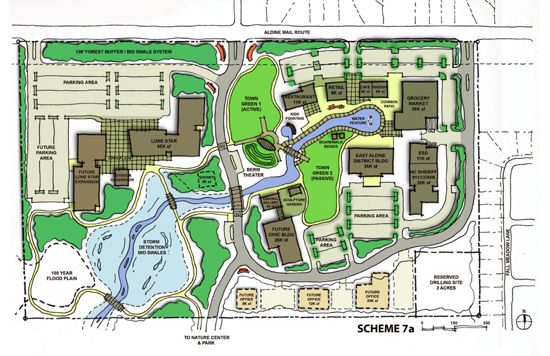 The East Aldine District board viewed the latest iteration of the Master Plan for their proposed new Town Center, to be built on 61 acres of land on the south side of Aldine Mail Route, at their meeting last Tuesday evening. The site is between Stevens Elementary and Fall Meadow, and north of Keith Wiess park.

The new plan shows no radical changes from the one presented a few months ago, but details of the development help the board to envision the final result.

The major elements in the plan, seen on page one of the Northeast News, include a new college for Lone Star College – North Harris, that would be larger than Victory Center or Greenspoint Center, and serve the immediate MacArthur/Aldine students. It is shown with adjacent on-grade parking, and room for expansion that could actually double the classroom space.

A new feature is a major grocery store, with adjacent retail shops, restaurants, and the Sheriff’s storefront office. These would be close to the street, with parking at the front door.

Outdoor development includes two “town greens” and a waterway meandering through the center of the site and into Keith Wiess park.

Walking trails and a community outdoor theater with bermed seating are included. There is room for more buildings and outdoor features as needs arise, the planners said, and they emphasized that the ideas are fluid and may change with community input.

NORTH HOUSTON –Hundreds packed the dining room at the Hilton Hotel last Wednesday, to be informed and have confirmed what many already knew – that North Houston is booming with new projects, new housing, new roads, and a strong economy that might continue for many years.

The North Houston Association has been the coordinator and leader of this growth for some time, led by Executive Director Paula Lenz and an influential board.

This luncheon was meant to be a “snapshot and development showcase” to serve as an update for all the parties that are involved in the boom. Many are aware of their contribution, but this meeting served to inform them of the work of others in similar fields.

The keynote speaker was Dr. Jim Gaines, of the Real Estate Center of Texas A & M University. Through slides and charts, and with a sense of humor, he presented the growth charts and curves that always seems to point upwards. He explained that Houston is growing at a yearly rate of 4.3%, only exceeded by Austin at 6.8%. At this rate, by the year 2050 the greater Houston area will have grown from 6 million people to 14.5 million, he said. At that time, the ethnicity of the area will be 55% Hispanic, the new majority.

Following the keynote, Jon Lindsay introduced the developers who spoke on their individual projects. This included these speakers:

Karl Mistry, Toll Brothers, on this corporation which is relatively new to Houston, and their market niche in upscale housing, expecially in the Magnolia area;

Peter Barnhardt for the Caldwell Companies. Their projects include Towne Lake 2450 acres, Boardwalk, Willowcreek Ranch with 1 to 5 acre homesites near the future Grand Parkway, and Cypress Crossing;

Alex Sutton, president/CEO of The Woodlands Development Company, who said the population of The Woodlands is now 105,000 and there is still a large pent-up demand for housing, and then he showed the next project Hughes Landing on Lake Woodlands;

Jim Holcomb, Holcomb Properties, who developed Imperial Oaks on Rayford / Sawdust Roads, a project with 1200 acres and about 5000 housing units. He stressed that growth impacted the infrastructure, including roadways, and must keep up with needs in the future;

Keith Simon, of CDC Housont / Coventry Develoopment Corporation, who are developing Springwoods Village next to the new ExxonMobil campus. This will include 5000 residential units, a town center with one million square feet of retail/hotel/commercial, and generate 10,000 to 12,000 including the ExxonMobil office campus.

The luncheon was hosted by both the North Houston Association, and the Lone Star College System, and its North Houston Regional Center for Economic Development.

The North Houston Association advocates and supports projects and initiatives which advance the business environment and improve the quality of life in north Harris and south Montgomery counties.

Lone Star College’s North Houston Regional Center for Economic Develoopment serves as a resource and information hub in support of business recruitment, retention, expansion, and economic sustainability in the north Harris and south Montgomery counties. In collaboration with stakeholders, NHRCED is a regional advocate committed to ensure that the region continues as one of the state’s most dynamic business environments.