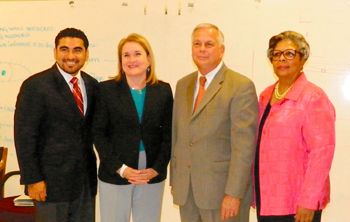 A large crowd of interested residents turned out for a Town Hall session last Tuesday evening, to meet and hear from their elected representatives in state and federal government. The meeting was held at the Sheriff’s storefront on Aldine Mail Route.

After introductions, Congressman Gene Green reported on the state of bills in Congress, and his constituent events this month while on break. Included is a Northside Job Fair on Monday, September 9th from 9 a.m. to 1 p.m. at the Campbell Center. Also, a Paying for College workshop will be held September 16th at Jeff Davis High School, from 6:30 to 8:00 p.m.

Green’s reports included updates on the ACA or Affordable Care Act (Obamacare), the Immigration Reform bill, not yet passed, the NSA surveillance program and its infringement on civil liberties, the federal budget, and sequestration or the limit on government spending.

Senator Sylvia Garcia made a report on her activities in the State Senate, with emphasis on issues that had local interest. She co-sponsored a bill to control and license salvage yards, but this was vetoed by the governor. With Representative Thompson, she sponsored a bill to allow the East Aldine district to collect sales tax in a small section adjacent to the current area. She worked to get water district legislation, to benefit customers and limit water companies. This will be on the ballot in November, she said. Another ballot issue which she was in favor of will be funding in the amount of $1.2 billion for road construction and maintenance. This will not require new taxes, the money will come from the “rainy day” fund. She was concerned about the Voter ID laws, that will be in effect and require voters to show a photo ID. She said this may infringe on some minority’s voting rights. Garcoa. Thompson, and others including Wendy Davis in the legislature supported a bill to require equal pay for women, known as the “Lilly Ledbetter Act.” This passed but was vetoes by the governor.

Representative Senfronia Thompson, known familiarly in the Legislature as “Mrs. T,” reported on a variety of issues that she and her colleagues had sponsored.

She started by characterizing the Legislative sessions as akin to a “soap opera” at times, but nevertheless resulting in some positive bills.

One of the most important issues that Representative Thompson spoke out for was the limit on abortions after 20 months of pregnancy. The appeared on the House Floor and spoke strongly against this bill, and the right of woman to determine for themselves.

She said that Texas plans on establishing a trade office in Taiwan, to enable importation of Texas products, including beef producers to sell their meat there.

She said the education bill included $80 million for a new high school for North Forest, with a new sports facility also. She pointed out that after Hurricane Ike these facilities were damaged, and the district was unable to restore them to an acceptable condition.

She also worked to raise the funding on legal aid for disadvantaged citizens from $10 million to $50 million. Also, the salary for DPS troopers was increased to be more competitive and to insure retention.

An important bill for many seeking employment is House Bill 798, which will no longer deny an occupational license if the applicant has a class C misdemeanor record. Also, House Bill 1188 will allow the employment of ex-prisoners without an employer assuming more liability for their work.

Thompson, also an attorney, said that she helped pass the “Michael Morton Act,” which requires prosecutors to disclose evidence to the defense team that they previously could withhold.

She also sponsored, along with Senator Wendy Davis, a bill to help victims of sexual assault cases, requiring rape kits at their hospital, adequate reporting, and counseling.

House Bill 392, will make it easier for servicemen and women deployed overseas to vote in elections.

House bill 3935 authorized the annexation by the East Aldine District of four adjacent parcels, to collect taxes and provide services to these areas.

In the area of eduction, Thompson supported the change in required testing for high school seniors, limiting the tests to five, and to allow seniors to graduate with one of two career avenues, college or vocation, with different requirements.

Representative Walle praised Senfronia for her work, and her stature in the Legislature.

He noted that the legislature restored much of the money previously cut from the Education budget, restoring $3 billion.

He said his work was “neighborhood centric” and cited the limitations now placed on water utilities and their billing practices.

Other neighborhood issues he is working on include noise control, and salvage yards.

He wants expansion of federal Medicaid funding, and cited failed leadership by Perry and Abbott as the problem.

He praised the legislature for providing new funding for transportation, putting the “Rainy Day” fund on the ballot for a citizens’ vote.

On the abortion bill, he opposed it, and said this is a personal decision all must make, not a political issue as some tried to make it.