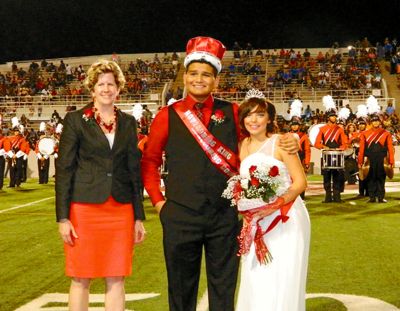 Thorne Stadium was the site of a close game between rivals MacArthur Generals, and the Aldine Mustangs, as the game lead went back and forth right down to the end.

This also was the MacArthur Homecoming game, with a capacity crowd on that side of the stadium.

The Generals scored early, with a march down the field and a 1 yard TD run by Joseph Pellerin. But Aldine countered with offense in the second quarter, with long accurate passes by QB Kendarian Carter, who had 117 yards for the game. His receiver was Joe Lewis, with 7 catches and 120 yards. At halftime, the game was tied 7-7.

MacArthur’s RB Derrick Ford continued to rack up yards, as he has all season, with 147 yards on 27 carries. However, Aldine lead for most of the second half, and only in the final minutes did the Generals manage to pull out a win. With 32 seconds left, Pellerin passed to Elushua Williams, who pulled in the pass over his shoulder on the goal line.

With this game, the Generals record goes to 4-2, while the Mustang record is 0-5.