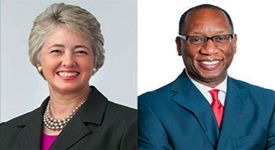 HOUSTON – Early voting for candidates and propositions is currently in progress, from Oct. 21 through Nov. 1. Election day is Tuesday, Nov. 5th, from 7 a.m. to 7 p.m.

One ballot position of local interest is a trustee election for Aldine ISD. The incumbent Jose Palacios is running against Patricia Ann Bourgeois. Palacios was appointed to the position last August after the retirement of trustee Marine Jones. Palacios has six children that have attended or graduated from Aldine schools. Other AISD trustees running unopposed are Rose Avalos, Rick Ogden, and Steve Mead.

Harris County Clerk Stan Stanart has reported that early voting is running heavier that last election, apparently because of the interest in the mayor’s race, pitting incumbent Annise Parker versus challenger Ben Hall. He also said that the heavier turnout could be related to interest in early voting due to the requirement for a photo ID.

The ballot is long, and this favors early voting, too. Ballot choices include 9 Constitutional Amendments, the Mayor’s race, City Council seats, Houston Community College trustees, Houston ISD trustees, and two propositions related to the Astrodome and a joint processing center for arrested individuals.

In addition to Parker and Hall, seven other candidates are on the ballot. Parker is running on her record of services with low taxes, and Hall is challenging on job and economic growth issues.

Stanart said that in the first week of early voting, he had received almost 30,000 votes, of which 10,000 of those are mail ballots. He said that this was double the amount from the election two years ago, and the most he has received in early voting in the last 12 years.

A complete guide to the elections is available from the League of Women Voters, at www.lwvhouston.org.

The nine amendments require study to know how to vote, but most sources recommend a YES vote on all nine. The proposition receiving the most attention is #6 creating a Water Fund for future water projects in the state. It allows $2 billion to be transfered from the “Rainy Day Fund” into a revolving loan account that would be used for state-wide water projects, and then repaid for ongoing new projects.

The other amendment of interest to many is #5, which allows Reverse Mortgages to be used for second homes or downsizing to another homestead residence.

City Council race for District B finds the incumbent, Jerry Davis, facing three challengers. The main issue will be whether Davis has done a good job representing this district.

City Council District H is now represented by Ed Gonzalez, who does not have an opponent and will be reseated.

Voters also will vote for “at-large” candidates for city countil, and some familiar names are on this ballot position, including Roy Morales, who ran previously for mayor, and Brad Bradford, former police chief.

Controversial City Controller Ronald Green is challenged by Bill Frazer, an experienced CPA. Frazer is endorsed by the Houston Chronicle over Green.

The ballot will include election of new trustees for Houston Community College, and running are incumbents Yolanda Navarro Flores and Bruce Austin, as well as challengers.

For those who live in the city, they will vote on Houston ISD trustees, too. These include incumbents Anna Eastmen, the current president of the board, and Harvin Moore.

Depending upon where you live, you might also be asked to vote on local issues such as MUD (Municipal Utility District) bonds.

The East Aldine Management District will have a proposition on the ballot to collect a 1 cent sales tax in recently annexed areas of the district. This tax does not affect local residents, except for purchases in those areas. Funds are used for district projects. 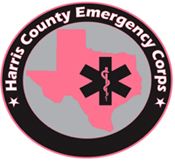 NORTHEAST – The HCEC (Harris County Emergency Corps), who runs the ambulance and EMS service for the Aldine area, has proposed a new home visitation service for “frequent users” of the 9-1-1 system in all of Harris County. The goal is to reduce the unnecessary 9-1-1 call utilization. HCEC will identity and enroll residents who qualify for this service in a CHP or Community Health Paramedic Program, which will initiate weekly visits to the homes of persons with health needs. Then they will provide education, medical evaluation, ensure medication and treatment compliance, and in the process reduce the number of unnecessary ambulance calls and emergency room visits.

Residents within ESD#1 and the East Aldine District would not be charged for these services.

When enrolled, patients will receive weekly home visits by a paramedic for the first month.

HCESD#1 has budgeted $144,204 for the first year of this program, and has received a grant from the East Aldine District for $60,000 toward expenses. The balance will come from grants and other sources, they said.

In their presentation to the District, HCEC said they responded to 18, 792 calls for service in a year’s time, and that 6180 of these came from the East Aldine area. Of those, 40% or 2927 were repeat users, that would qualify for this service in lieu of ambulance transport or EMS help.

HCEC hopes to reduce unnecessary calls by up to 85%, in line with national studies.

In approving the grant, EAD president David Hawes noted that this service is within the goals of the district, to improve the quality of life for residents. 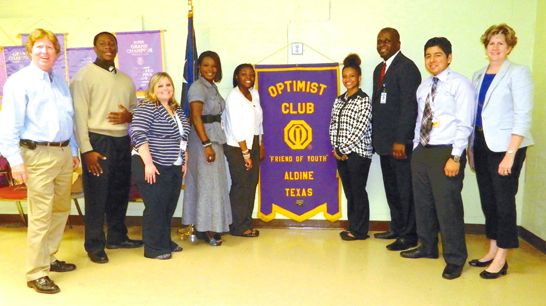 Four students from Aldine High Schools were chosen to attend the HOBY leadership seminars, taking place annually at a three day retreat at the Texas A & M campus in Galveston.

HOBY stands for Hugh O’brian Youth Leadership Foundation, founded by the namesake actor after an inspiring visit to Dr. Albert Schweitzer in Africa.

Students are chosen from Sophomore classes, to attend the three day leadership conference, with the goal of “teaching young people to think for themselves.”

Although HOBY is an independent organization, it is sponsored in Aldine by the Optimist Club, with the help of Aldine ISD.

This year, students from MacArthur, Davis, Aldine, and Carver high schools were chosen, although students from anywhere are eligible.

The stay for students at Galveston included fellowship, leadership training, personal development, and seminars with business and education leaders as speakers. Each of the HOBY students is challenged to “do their very best in school and life.” The four students made individual reports of their experiences to the Optimist Club at their regular meeting last Wednesday, and it seems each benefited greatly from the experience.