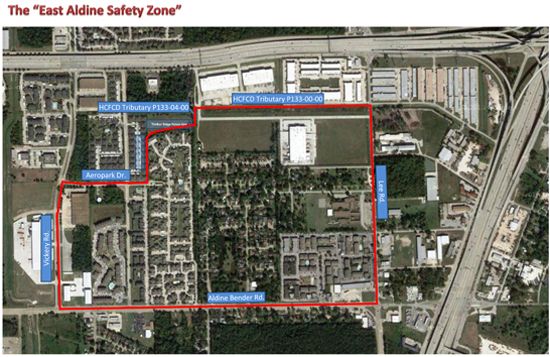 EAST ALDINE – Harris County Attorney Vince Ryan is seeking a court order to ban members of the Crips and the Bloods gangs from entering or committing crimes in a north Harris County community.

The East Aldine Safety Zone is 217 acres or about a third of a square mile to the east of Highway 59 and south of Bush Intercontinental Airport. The Safety Zone contains two schools (Francis Elementary and A&W Academic Academy), apartments, restaurants, a residential community, and retail stores.

The map can be viewed at http://www.harriscountytx.gov/cmpdocuments/caoimages/EastAldineSafetyZone.pdf.

“The members of these street gangs regularly engage in criminal activity in this community, putting residents in danger and harming their quality of life,” said Ryan. “This type of injunction is a proven way to remove dangerous criminals from a community.”

Ryan worked with the East Aldine Management District in the preparation of the court petition. He won a similar injunction last year against other members of the Crips and Bloods that banned them from the Brays Oaks Safety Zone in southwest Houston.

The County Attorney’s petition states that the defendants have been regularly engaging in gang activities in this community including weapons offenses, criminal trespass, possession of illegal substances, making terroristic threats and graffiti. The petition asks that the gang members be banned from being physically present in the Safety Zone, as well as forbidding their possession of materials for graffiti and communications devices including cell phones and prohibiting wearing clothing that identifies them as gang members while in the Zone.

The East Aldine Safety Zone includes the Haverstock Apartments. Haverstock had been rife with gang activity before the district attorney obtained a similar court order in 2010 banning gang members from what was called “the most dangerous apartment complex in Harris County.” Living conditions improved dramatically after several gang members were arrested and sent to jail for being at the complex. 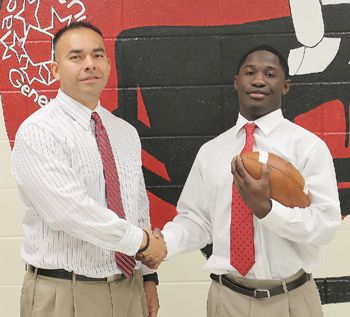 Derrick Ford wasnt the biggest guy on the field for the MacArthur Generals during the 2013 season, but he sure played big in leading his team to a 5-5 season that saw the Generals come within one game of landing a playoff spot.

Ford, a senior, rushed for a team high 1,239 yards and scored 13 touchdowns. He also added eight receptions for another 42 yards. His performance during the 2013 season earned him the Northeast News Offensive Player of the Year honors.

Fords coach, Andy Garza, said the 5-7, 180-pounder did an excellent job not only on the field, but also in the locker room. The Generals lost starting quarterback Doug Steed for the season when he suffered a knee injury the week before the season began. Garza knew he needed someone to step up on offense and become the vocal leader of the unit, and he found his man in Ford.

Ford was a three-year varsity letterman and a two-year starter. As a junior, he rushed for 299 yards and two touchdowns, but stepped up his game as a senior as he became one of the leading rushers in District 18-5A.

Derrick is sort of an elusive power runner, Garza said. Hes not the biggest guy, but hes very strong for his size and he has good speed. When given the chance, he could break one.

Ford broke a couple of long runs during the season, the first was a 68-yard touchdown run against Galveston Ball that carried the Generals to victory, and the other came against Nimitz, where he again went 68 yards for a touchdown.

On the first play of the Ball game, Derrick goes 68 yards for a touchdown against an eight-man front. That solidified in our (the coaching staffs) minds that we had something special at running back and that district teams were going to have to watch out for him.

Ford only began playing football his freshman year. He said hes always loved watching football, and decided to give it a try himself when he arrived at MacArthur Ninth Grade School four years ago.

I love the game, he said. I love to watch Peyton Manning and Marshon Lynch play. Im glad I decided to play it myself. I had a good time playing these last four years.

Being our featured back opened a lot of eyes as to what he can do when given the opportunity, Garza said. Hes a great leader and a passionate football player. Hes a very savvy young man who did a good job of motivating the other guys around him.

Ford said hed like to major in math in college and is thinking about entering the teaching profession in the future.

Garza said he believes if given the chance, Ford could compete at the next level and be a positive influence at the collegiate level.

His personality is like that of the Hulk, Garza said. Hes a very respectful young man and his teachers and classmates love him. When he is in his football element, his passion shines through and that is when he is at his best. Some of the things he did on the football field were very special.

Heres hoping Derrick Ford gets to do some special things at the next level.