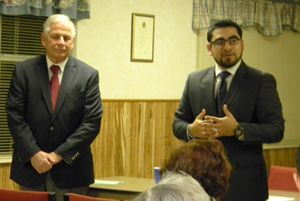 Green said that in Congress, “Last year was probably the worst year I ever spent as an elected official in office, because in October the Government shut down for the first time in almost 17 years.” He also mentioned “I was frustrated.”

Congressman Green said that for the first time in 4 years, the budget was established in December right before Christmas. And by the middle of January, Congress passed a comprehensive budget bill. He explained that it was a give/take; and some things he does not like were passed as well as some things he likes. Representative Armando Walle also attended the meeting and said that “sometimes you have to compromise” to be able to get your bill passed; a bill in favor of the community he represents.

Texas legislation session will resume in 2015, Rep. Walle said. And last session, public school cuts were restored “because in the previous session we cut about 5 or 6 billion dollars out of public education; this session we’re able to restore a little less than 4 billion dollars back into public schools,” said Rep. Walle. On January 21, started “the next round of a lawsuit where about 100 statewide school districts (rural and urban) filed suit against the state because of the continuous underfunding and inequality of funding public schools.”

Bills Passed by the state legislature in the last session:

-Transportation bill; 2 billion dollars out of the rainy day fund.

-Statewide water project, which takes another 2 billion dollars out of the rainy day fund.

Rep. Walle said they are working on implementations of the bills that did not pass and even the ones that passed before the next legislation.

Another public concern Rep. Walle mentioned is the expansion of I-45 where public input is needed from “business owners and other people that may be affected by expansion or acquisition of certain properties that would be taken over basically by the state to expand I-45.” With this, business owners are concern that they may be out of business. Rep. Walle encourages all the community and specially those that will be affected, to submit their comment by January 31, 2014 either to his office or to TxDOT.

Finally, Congressman Gene Green is working on the expansion of federally qualified health centers in the community like the Vecino Clinic, which is based at Denver Harbor but they have a satellite location on Airline, north of Tidwell. And they are looking to expand in the Greenspoint area and on 59 and Hardy, said Rep.Walle. According to Congressman Green, this is his major concern because Texas has the highest percentage rate of uninsured people.

Questions from the audience included pollution from China affecting United States, regulations and control on Internet usage by providers, and environmental clean-up.