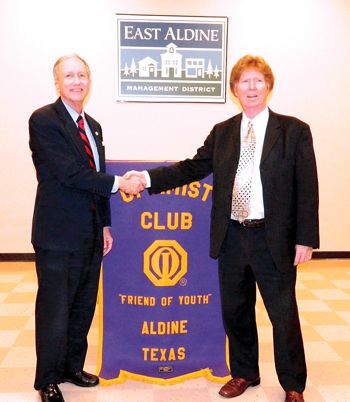 ALDINE – At the invitation of the Aldine Noon Optimist Club, the Harris County Attorney Vince Ryan spoke to members and guests at their regular luncheon meeting last Wednesday, February 26th.

To accommodate a large audience, the meeting was held at the East Aldine District meeting room.

Ryan spoke about the work of his office, and his history of public service as a county attorney. He was elected to office in 2009, following Mike Driscoll who retired after 16 years as county attorney.

His office has recovered from severe budget cuts in the first year he was in office, he said. They now have 100 attorneys and 100 support staff. In general his office works on civil cases, representing the county and citizens. Thirty percent of that work is involved with child protection, he said.

Through the use of contract attorneys, he has been able to offer more service to agencies such as the East Aldine District, where his office pursues violators of community compliance issues. This service is modeled after the contract deputies which the county offers through the Sheriff’s office, he said.

In the East Aldine area, his contract attorney has been effective in setting up a “safety zone” around a neighborhood school, to keep away gangs and criminals. They also are working on issues of game rooms, illegal gambling, and prostitution.

Ryan was asked what opportunities were available for volunteers, and he said that 50 law student interns were helping in his office.

Another major issue that his office has been dealing with relates to the environment, and pollution of water and air. He has sued some big corporations, such as Shell Oil and Waste Management, saying that high profile cases such as these help discourage all other polluters. However, he cautioned that environmental activists must also be aware of the jobs that these industries provide, that are a vital part of the community.

Another issue his office has been dealing with is human trafficking, prevalent in Houston and the county. Although he has vigorously presecuted some of these, he is faced with limited resources to investigate. He suggested that the public could help by reporting criminal activities at the Sheriff’s iwatchharriscounty.com.