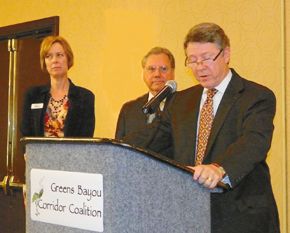 Chairman Bill Franks acted as Master of Ceremonies, and Executive Director Jill Boullion presented an overview video on the state of the coalition and its accomplishments in the last year.

Boullion had a lot to present, as the Coalition currently has about 40 projects, taking place in four distinct areas or “reaches” around the North and East sections of the County.

The Coalition partners with a number of other organizations to accomplish its work, and this idea led to Emmett’s keynote theme, partnerships.

Boullion pointed out that the Coalition covers approximately 45 miles in length, and its goals are recreation, economic development, and enhanced quality of life. In addition, it works to remediate flooding and other threats to the bayous.

GBCC is funded by memberships and grants. It works with the help of the National Park Service, Texas Parks & Wildlife, and a number of corporate and organizational sponsors.

In his keynote address, Emmett expanded on his State of the County theme of Cooperation and Consolidation with other governmental or corporate entities, to create controlling groups that can accomplish more than working alone.

Emmett said that because of the extreme population and economic growth of the county, and the region, we must have governments that can respond and control in a more regional basis.

Priorities for these will be infrastructure, including transportation, parks, and waterways. He championed the idea of joint government entities, for city + county + subdivisions. He said that current coalition government bodies, such as the flood control district and Metro, could be expanded and more coordinated, to help meet the region’s needs. He acknowledged that some consolidation ideas would be difficult, such as law enforcement, but were needed.

Other regional issues, he offered, were Healthcare and county boundaries.

His final challenge: “Play to Win–don’t Play not to lose.”

Mayor Parker echoed many of the same thoughts on joint projects, noting that the city and county already have parks, libraries, and soon an inmate processing center together. With a nod to the GBCC, she said “My passion is parks and trails.”