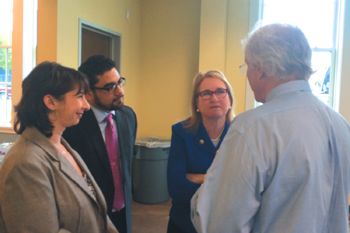 HOUSTON – Over a hundred homeowners and interested citizens packed the state hearing room last Thursday morning, as a state mandated SOAH hearing took place to determine facts and rule on disposition of the complaints against Suburgan Utility Company, their service, and their recent surcharge added to utility bills.

The State Office of Administrative Hearings was supposed to take place starting at 10 a.m. in their offices on the North Loop, and the East Aldine District had provided a bus to take the public there due to limited parking.

However, so many people were present, that for fire safety reasons the meeting had to be moved to larger quarters, and eventually it reconvened at the Leonel Castillo Community Center, thanks to the help of Senator Sylvia Garcia.

When the hearing got underway, presentations were made by the Texas state office of public utilities, the East Aldine attorney Jim Boyle, including about six witnesses from Castlewood, and the Suburban Utility Company attorneys. Castlewood residents repeated the stories of poor water quality, poor service, interuption of water entirely, and the $60 per month surcharge as untenable.

As a result of the hearing information, TCEQ filed a motion to eliminate the $60 surcharge, and Suburban Utility Company agreed to withdraw the surcharge until a hearing in 2015.

Yesterday more than 100 ratepayers from Castlewood showed up at the Preliminary Hearing on Suburban Utility Company’s request to increase rates, which started out at the offices of State Office of Administrative Hearings on North Loop West, near US 290. Over 100 customers from three other subdivisions of Suburban also showed up at the hearing. Judge Penny Wilkov, an administrative law judge from Austin, was in charge of the hearing.

The hearing room was too small for the number of customers who showed up. Thanks to the efforts of Senator Sylvia Garcia the hearing was moved to the Leonel Castillo Community Center.

Senator Garcia spoke to the need to eliminate the surcharge because Suburban should be getting the money for necessary improvements from the Texas Water Development Board, not by surcharging ratepayers.

After all the comments by customers and arguments by lawyers for various parties were heard, Suburban agreed to withdraw the surcharge on all water consumption after March 1, 2014. There will be no surcharge before a final decision is made in the case.