‘Barks’ in the Park at East Aldine

This was a free program where Teri Mercantante, dog trainer, gave some tips to dog owners about responsible pet ownership, canine health, dog behavior and safety and nutrition.

Dog trainer Mercantante explained that dogs bark to get attention or when they are bored. If you keep telling the dog to sit down when he is barking, you are giving him attention and he may not obey your instructions. She also recommends do not let the dog loose on your yard when nobody is at the home because he [the dog] can get bored and start barking which can annoy neighbors and that could have consequences or he can also dig and destroy your flowers and yard.

She also explained that dark chocolate could be poisonous for dogs; even more for small dogs. Dogs also repeat behavior when they get something pleasant, so she recommends to give a small reward such as a small piece of hot dogs when he behaves good and obeys. Other recommendations include to take your dog at least once a year to the vet for regular check up. 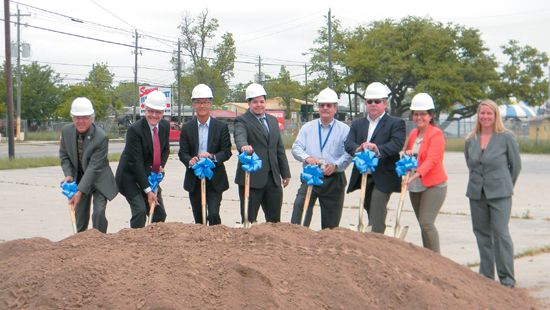 The groundbreaking “is the result of 5 years of patient, hard work and persistence,” said Airline District Executive Director Teri Koerth. “This project is a signal of change, improvement and revitalization for the area.”

Everything started in 2008 when the District provided the 50 % matching grant for a pedestrian study which was completed on March of 2009 and its purpose was to evaluate the existing conditions and major corridors in the district, provide recommendations that will improve the safety of pedestrians and bicyclists in this busy commercial area to normalize the flow of traffic.

Funds for the design and construction of these projects come from the Galveston Area Council Transportation program and other portions from the Airline District, which total $3.5 million dollars for these projects, said Koerth.

The projects will include:

Projects started a few days before the groundbreaking ceremony and have a year to be completed, but the district would like to have it completed within 4-5 months.

This job has been the combination of multiple agencies such as Texas Department of Transportation, Houston-Galveston Area Council, Harris County, TSE Engineering, Airline Improvement District Board and state and federal officials.