EMMETT MAKES PROPOSAL TO SAVE ASTRODOME 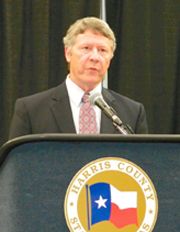 Harris County Judge Ed Emmett announced a proposal this afternoon to convert the Harris County Domed Stadium – known worldwide as The Astrodome – into the world’s largest indoor park and recreation center. Emmett unveiled his proposal from the floor of the Dome, which he described as the realization of Judge Roy Hofheinz’s “vision of the future.”

“I believe it is time to put forth a new vision for the future of the Dome,” Emmett said. “With that in mind, I am suggesting that we explore the concept of creating an indoor park and recreation area inside the Dome for the people of Harris County. The world’s largest indoor park.”

Emmett has been exploring the indoor park concept with local officials, stakeholders and interested parties for the past couple months, seeking input and suggestions and refining the idea. While details of the concept are still being refined, Emmett suggested leaving it open to the public except when in use by tenants like the Houston Livestock Show and Rodeo, Offshore Technology Conference, or others. He also recommended including a large, open green space that would be perfect for festivals and other community gatherings. Emmett also proposed having a pavilion for music and other events and sporting facilities from archery ranges to hiking and biking trails.

“Rather than try to convert the Dome into something it was never intended to be, I think it is time to look back to the original vision of Judge Hofheinz,” Emmett said. “That vision was to provide a place for traditional outdoor activities in a climate-controlled space. A space like none other in the world.”

Aldine’s local hospital, with a troubled history, has closed its doors once more. Filings with the bankruptcy court indicated that the small, neighborhood hospital was ordered closed by the bankruptcy judge Marvin Isgur on August 12th. The owners, an investment group known as Little York Hospital of Houston, aka as LTMH Houston, reported assets of $1.5 million, and liabilities of about $27 million.

Creditors include First National Bank of Edinburg, the IRS, and the state of Texas Workforce Commission.

The hospital has had many names and owners over the years. Most recently it was Renaissance Hospital, prior to St. Anthony’s. The investment group also owned hospitals in Grand Prairie and Groves, Texas that also had financial difficulties.

It has been known since last year that St. Anthony’s has had trouble meeting payroll and paying its bills. CEO Jason Leday issued a statement in January, saying that the problem stemmed from another company, Novitas Solutions, being too slow to reimburse the hospital for Medicare claims. Novitas has said it follows federal guidelines, and is not at fault.

The hospital had 39 acute beds, and employed 44 full-time and 30 part-time employees.

It is not expected to reopen, and the bankruptcy trustee plans to sell assets and equipment from the building.

St. Anthony’s had filed for bankruptcy protection in July, and was unable to find new financing or a new buyer, according to the hospital.