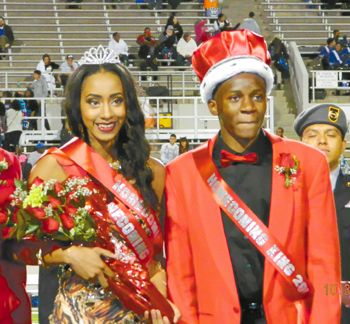 THORNE STADIUM – In a classic struggle between two evenly matched teams, the MacArthur Generals under coach Andy Garza brought a sharp passing game to Thorne, while the Aldine Mustangs had their patented running game, under coach Lionell Crawford.

Each team had 11 first downs, the Generals had 273 passing yards, and the Mustangs had 167 rushing.

Mac QB Anthony Villareal was sharp on most of his 12 for 21 completions, totaling 271 yards. His favorite target was Ray Arriola, who totalled 5 catches for 160 yards.

Aldine’s leading rusher was QB Andrew Davis, with 22 runs for 55 yards and 3 TDs.

Scoring opens in the first quarter with a 38 yard pass from Arriola to J. Reece, and the Generals led. But each team scored in three of the four quarters, keeping the score close. Trailing 23-14 in the final 4 minutes, the Generals mounted a drive to come within 2 points, but stalled at 23-21. 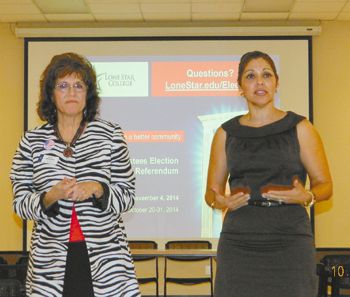 Tuesday’s bond proposal will provide $485 in financing to pay for projects at all the campuses, and in addition three new board members will be elected.

This information was detailed in a presentation that LSC Interim President Penny Westerfeld made to the Houston Intercontinental Chamber at a luncheon on Tuesday, and an evening meeting on Thursday for residents of the Aldine area at the East Aldine offices on Aldine Mail Route.

Emphasizing that due to increase in the tax assessment base over the last few years, no new taxes or tax increase would be required to pay for the bonds.

Projects that are included in the bond budget include new advanced technology centers, renovations to current workforce education facilities, and campus expansion projects at each location.

For the North Harris college, the funds will pay for a new instructional building of 60,000 sq. ft., an advanced technology workforce center of 50,000 sq. ft., expansion of Victory Center 25,000 sq. ft., renovations to existing facilities at the main campus and Greenspoint campus, and increased parking for 400 cars. In addition, Lone Star College North Harris is planning to build a new instructional/workforce building in East Aldine of 60,000 sq. ft. in the communities new Town Center on Aldine Mail Route, that would be paid for with funds other than the bonds, according to Chancellor Stephen Head.

Lone Star College System currently has 90,000 credit and non-credit students. Since 2007 the college has added 33,565 students, an increase of 68%, and this growth may continue.

Lone Star College serves an area of more than 1,400 square miles with a population of 2.1 million, including some of the fastest-growing communities in the state. In the past four years, the LSC service area has grown by 176,000 people, more people than 39 U.S. states added during the same time period. An additional 242,000 people are expected to increase the region’s population to 2.55 million by the year 2019.

The LSC tax rate of 10.81 cents/$100 valuation is lower than it was 15 years ago. And the Board of Trustees has lowered the tax rate 6 of the last 10 years. LSC maintains a tax freeze for residents 65+ years old, and/or the disabled which means the actual dollar amount of taxes owed will never increase, even if the property value increases.

The election will include a vote for new board members. Lone Star College System Trusteeds are elected by single member districts. Voters residing within a trustee district may vote in that trustee election. Current positions and candidates to be elected include:

Tuesday is election day, polls will be open from 7 a.m. to 7 p.m. at your regular precinct location.