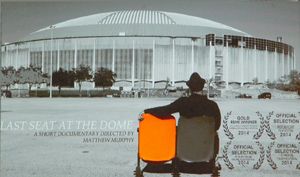 HOUSTON – Filmmaker Matthew Murphy wanted to buy a seat from the Astrodome, when they went on sale as mementos last December. The purchase was to be in honor of his late grandmother, and he filmed the auction sale as part of the memory.

But after turning the footage into a 15 minute short documentary, his friends told him to enter it into competition, and it has now won several festival awards.

The film includes footage of the public sale, historic event footage of the Astrodome, and interviews of others describing their feellings of that day.

Last Thursday, Nov. 20 Murphy showed the film at a public screening for the public and friends of the Astrodome. The event was held at the Ecclesia Houston, a modern church in a renovated warehouse near downtown.

Several hundred supporters of the film and the Astrodome came, to hear a panel of preservationists speak on the historical status of the building, including its designation as a federally protected Landmark, and a pending status as a State Antiquities building.

On the panel were David Bush of Preservation Houston, Beth Wiedower of the National Trust for Historic Preservation, Harris County Judge Ed Emmett, filmmaker Matthew Murphy, and media “guru” Michael Garfield (the “High-Tech Texas,” who acted as master of ceremonies and hosted a live text-in on the internet for those who wanted to participate but were not present at the screening.

Also in the audience were others interested in saving the Dome, including Rev. Bill Lawson, Attorney Edgardo Colon, CEO/President of the Harris County Sports & Convention Bureau, and Ted Powell and Cynthia Neely, proponents of landmark designation.

The film can be viewed at www.preservethedome.com.

After the screening, comments by the panelists and answers to questions were made.

Judge Emmett made these points:

— The Astrodome is a Harris County facility, not Houston nor private;

— It is structurally sound;

— The bonds are paid off;

— Since its inception, it has always been a multi-purpose, outdoor type space.

— None of the county commissioners are in favor of tearing it down.

David Bush recalled many of the famous events that were held at the Astrodome: conventions, presidential speeches, rodeos, and landmark sports events.

Reverend Lawson recalled how Judge Hofheinz had quietly solved the integration problem of the time with integrated facilities.

Judge Emmett said that in December a team from the Urban Land Institute was visiting Houston, and would study and advise on re-uses for the Dome. He said his indoor park scheme was moving ahead, but “it’s your building. How can we use it?” In closing, he reminded everone of its Iconic stature, a symbol of Houston known worldwide.