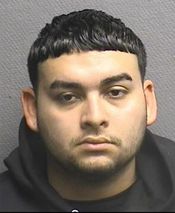 Herrera is accused for his role in the death of his girlfriend, Jacqueline Gomez, 17, of Houston.

Ms. Gomez, a MacArthur high school senior, attended her prom the previous evening and then returned to a room at the Hyatt Regency North, along with her boyfriend. The boyfriend stated they consumed alcohol before falling asleep in the room. When Ms. Gomez’s boyfriend woke in the morning, he could not wake up Gomez. Houston Fire Department personnel responded and pronounced her deceased.

Further investigation identified Herrera as the suspect in this case. He was arrested on Wednesday, January 14, 2015, and allegedly admitted to choking Gomez during the evening.

Herrera is charged with aggravated assault and not murder as the motive and official cause of Gomez’s death remain under investigation.